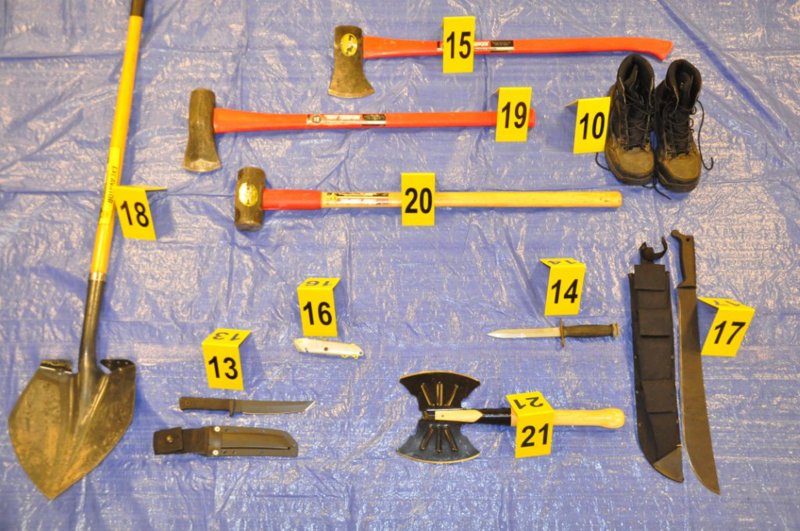 Police say Neal Falls, 45, answered an online ad for an escort on Backpage.com and brutally attacked the woman in her Charleston home. When Falls showed up at her door July 18, he started beating and choking her.

The woman, who goes by Heather, says Falls asked, “Live or die?” before pressing a gun to her chest. At one point during the struggle, Heather grabbed a rake to fend him off. That’s when Falls set down his weapon to subdue her and she snatched it away. She fired a fatal shot into Falls’ head in self-defense, cops say.

Now authorities are investigating whether Falls, of Springfield, Oregon, was involved in serial slayings in eight other states, including Nevada, Illinois, Ohio, New York, Oregon, Texas, Kentucky and California.

Falls may have had a disturbing online alter ego, too.

An Oregon cellphone number connected to Falls brings up a Facebook page for “BJ Ross.” The profile indicates Ross is female and includes a cartoon image of a scantily-clad she-devil.

In February of 2014, BJ Ross wrote, “The best part of being married with children. I didn’t have a chance to act like some of these sluts. Not saying I would or wouldn’t have, because you never no [sic] unless you get the chance to actually decide.”

Meanwhile, a December 2013 post shows a picture of a Barbie doll holding a knife above mutilated Ken dolls with the words, “Anyone else want a fuckin sandwich?”

After The Daily Beast reached out to some of BJ Ross’s eight Facebook friends, two people immediately de-friended the profile. They conceded they’d never met the person behind the page. “I thought maybe I knew a BJ,” one Fort Worth woman admitted. “I have no idea if it’s a real profile or not.”

Another Fort Worth resident told The Daily Beast she played World of Warcraft with a BJ Ross but didn’t know much else. “I haven’t talked to BJ in years,” she said.

The Daily Beast could not confirm whether the cell phone number still belonged to Falls. Calls to the phone have gone straight to voicemail, and voices messages were not returned. Facebook messages also went answered.

The Oregon cell phone number also appears on anti-prostitution websites such as exposingjohns.com and flushthejohns.org, where entries accuse a “BJ Ross” of soliciting hookers.

Little is known about Falls’ past. A Nevada woman claiming to be his roommate said she never had problems with him. He paid his rent on time and mostly kept to himself, she said.

“He had eight guns when he lived here,” the woman told KSNV in Las Vegas. “He had an AR. He showed them to me. He had a Beretta. He had eight guns. A lot of people collect guns.”

Falls rented a room in Henderson, Nevada from 2000 to 2008 and reportedly worked as a Hoover Dam security guard. He spent the last seven months traveling across the country, and a week and a half before the sex worker killed him, he was pulled over for speeding near Fort Worth, Texas, police say.

A former landlord in Eugene, Oregon told a local TV station that Falls worked a graveyard shift and slept during the day. She was disturbed when Falls brought home a puppy, which she claims he often isolated and kept in his car.

“The first thing that he did that was a little odd was that he immediately changed the deadbolt to his own room so that only he had a key,” the landlord told KVAL. “He said he had guns and weapons and that he was a security guard.”

One longtime friend of the family claimed Falls was the baby in a family of 10 children and that he survived a tumultuous upbringing.

“I know his life was not good at all,” the insider, who requested anonymity, told The Daily Beast, adding that Fall’s father “was very abusive … and beat their mother in front of [the kids].” (Calls and messages to several Falls family members were not returned.)

Falls seemed to break down in January after his mother died, the friend said. The suspect was also recently dumped by a gal pal, who was married the entire time and returned to her husband, the insider alleges.

Still, the friend refused to believe Falls could be a serial killer.

“He was calm,” the friend said. “You could talk to him and he would be normal, so it’s really surprising to hear any of this. Then you go back to his past and think, ‘Well, this is probably where it’s coming from.’”

“He traveled a lot,” the source added. “This is a shocker. I never imagined him being like this.”

Falls worked as a security guard at Niagara Falls in the past, the friend recalled. The assertion is startling in light of reports that Niagara Falls detectives are investigating whether Falls had anything to do with dismemberment homicides there.

“All I can say is he was a good guy,” the friend said. “I can’t see him going in there and strangling some woman.”

And yet, in Falls’ vehicle in West Virginia, police discovered what they call a “kill kit” in the trunk of Falls’ car, along with a handwritten list of other local women. Inside the kit were axes, handcuffs, long knives, a machete, a sledgehammer, bleach and a bulletproof vest. There was also a rubber tub large enough to hold an adult, NBC News reported.

“You could tell he was confident with what he was doing and saying,” Heather told the Charleston Gazette-Mail. “He had done it before. You could tell it.”

When it comes to ransomware, you don't always get … END_OF_DOCUMENT_TOKEN_TO_BE_REPLACED

Peyton Carr is a financial advisor to founders, … END_OF_DOCUMENT_TOKEN_TO_BE_REPLACED