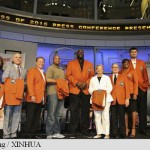 Three huge NBA stars, the Americans Shaquille O’Neal and Allen Iverson and the Chinese Yao Ming were inducted into the basketball Hall of Fame in a ceremony that took place Friday, at the Symphony Hall in Springfield-USA, according to the press agencies. O’Neal won 4 NBA titles with Los Angeles Lakers, in 2000, 2001 and 2002, and with Miami Heat in 2006, during a career of 16 seasons. He also has an Olympic gold with the USA national at the Olympic Games, in 1996. Shaquille O’Neal had a speech in which he thanked to his family and to all the people who helped him in his career. Shaq also entertained the public saying that he also wants to thank the big Kobe Bryant, who helped him to win three titles and who also helped him to be pushed off LA Lakers and to go to the Miami Heat.

Iverson was 11 times selected for the All Star Game in 14 NBA seasons and he was chosen the best player in 2001. He won the bronze at the Olympic Games in 2004, with the USA national. The Chinese Yao Ming was chosen the best player from the NBA in 2000, having 8 selections in the All Star Game and ending his NBA career at Houston Rockets. Ming has 2.29 meters and at this ceremony, he said that it is the first time when he feels so small when he looks at all the big players from Hall of Fame. The three basketball players inducted into the Hall of Fame worn, in premiere, orange jackets that, from now on, will come into the possession of this limited club of the world’s celebrities. At the same ceremony other celebrities from the sports world were inducted into Hall of Fame: the coach Tom Izzo, the referee Darell Garretson, Sheryl Swoopes-4 times winner of the feminine WNBA league and John McLendon-the first Afro-American coach from the NBA.

When it comes to ransomware, you don't always get … END_OF_DOCUMENT_TOKEN_TO_BE_REPLACED

Peyton Carr is a financial advisor to founders, … END_OF_DOCUMENT_TOKEN_TO_BE_REPLACED