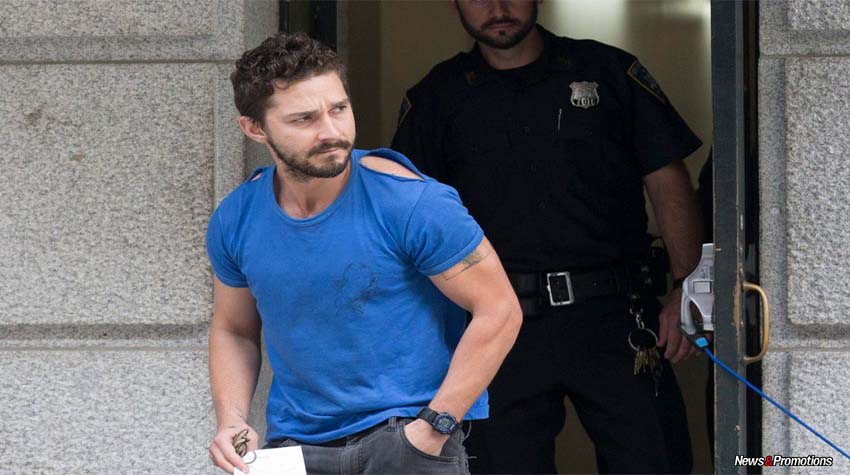 The actor Shia LaBeouf was arrested on Thursday night after an altercation that happened at the place of the anti-Trump ‘installation’ in New York, said the local police quoted by the AFP. The ‘installation’ consists of a video camera that rotates 24 hours, mounted on a wall in the vicinity of the Museum of the moving image, located in the neighborhood of Queens. Whatever the weather, all those interested are invited to say in front of the camera the phrase proposed by the actor: ‘He will not divide us’. Repeating this slogan is an act of protest against the new American President Donald Trump, said the team of artists LaBeouf&Rönkkö&Turner that initiated the project. According to the police, Thursday night, at about 12:30, the 30 years old actor, known for the roles in the ‘Fury’ and ‘Transformers’, exchanged words with a 25 years old man from Bronx.

LaBeouf grabbed the man by his scarf, pushed him on the ground and scratched his face. The reason for this conflict is not known. Unaware of the police presence, the actor said to the camera: ‘How are we going to make this s— okay to be a Nazi out here?’ The man saw a police patrol and the actor was arrested around the local time 01:00 (06.00 GMT), being accused of aggression and harassment, before being released. While Shia was handcuffed by the police, the participants in the anti-Trump protest were shouting: ‘Free Shia’ and ‘He will not divide us’.

The actor was shouting the same words while getting into a cab after he was released from the police section. He returned to the Queen’s Museum around 10.20 a.m. and chanted the same thing in front of the camera. In the past, LaBeof had problems with the police, being charged with criminal trespassing and disorderly conduct.

When it comes to ransomware, you don't always get … END_OF_DOCUMENT_TOKEN_TO_BE_REPLACED

Peyton Carr is a financial advisor to founders, … END_OF_DOCUMENT_TOKEN_TO_BE_REPLACED