You are here: Home / World / Sinosphere Blog: Q. and A.: Holden Chow on China, Elections and Hong Kong’s Attitude 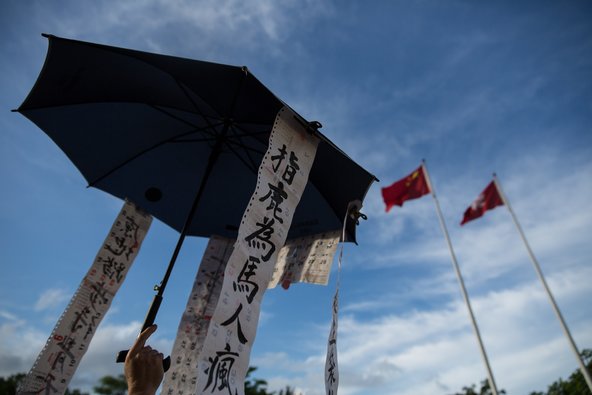 Hong Kong’s legislature is set to vote this week on a proposal to allow all eligible voters in the former British colony the chance to vote in the 2017 election for the city’s top leader, the chief executive. Supporters and opponents say the measure, which will require the support of two-thirds of the 70 delegates, is likely to be voted down.

The measure’s opponents, who are called “pan-Democrats,” say the plan promotes a fake democracy because it must be in line with restrictions set by China’s legislature, the National People’s Congress. Those guidelines, set last August, limit the candidates to two or three people nominated by a committee stacked with pro-Beijing loyalists. Opposition to that decision led to months of sit-in protests in Hong Kong late last year that shut down parts of the city. The pan-Democrats, most of whom took part in those protests, look to have enough votes in Hong Kong’s legislature, the Legislative Council, to block the measure.

Holden Chow, a vice chairman of the pro-Beijing Democratic Alliance for the Betterment and Progress of Hong Kong, said that the pan-Democrats would be making a mistake voting against the measure. The failure of last year’s protests to garner any sort of concession from Beijing should be evidence enough, he said in an interview, that Hong Kong should take what it can get. What is more, having an electoral system, despite the restrictions on candidates, will introduce a degree of competition into the system that will push even pro-Beijing candidates to seek support from the pan-Democrats and their supporters in order to win contested elections. It is that dynamic, he said, that can drive deeper political changes in the future. Excerpts from the interview follow:

Q.  What happens if the election package is voted down?

A. We have the Standing Committee of the N.P.C. decision in August, and the central government officials have already reiterated many times, that this decision will remain unchanged for quite some time. If you veto the package this time, next time, in some five or 10 years, you launch the political reform again, you will face the same framework. That means the status quo is maintained, but you’re wasting your time.

Q. Why should the pan-Democrats vote for the election proposal?

A. To me, having universal suffrage with five million eligible registered voters having a chance to elect a chief executive, that chief executive will tend to listen to people more. Because you have a vote. In a democracy, the head of government is bound to listen to the people. See what I mean? So that is good for our democratic procedures. It is a big leap in our democratic development.

You may disagree with that decision handed down by the N.P.C., and say it is too restrictive. But, honestly, once you have a democratic election, with universal suffrage, I’m sure than every single candidate who stands for election in the future would face the same question raised by the public and the media. What is your attitude on modifying or having more improvements in the nominating committee or in the electoral arrangement? Because in a universal suffrage election you have to court support not only from your own campaign, you have to court support from some people in the middle. You even have to court support from some of the pan-Democratic supporters in order to win. If you want to win the election you have to change your attitude. It’s as simple as that. So I think this is a good step for us to move ahead.

The pan-Democrats will say no, no, we will veto it, because Beijing has not allowed us to elect our candidate. They deny that there will be any more improvements in the future. I totally disagree.

Q. What does it mean to be pro-Beijing in Hong Kong?

A. I see myself as a patriot. My theory of being a patriot is first of all, because China is different from other countries right now, she is going her own way. Like it or not, this is a fact. A reality. O.K.? She has her own characteristics. Because of these reasons she has to go her own way. Consider the fact that China opened up the country in 1979 for economic reform, and that has brought about a huge change over the last 30 years.

Every country has its own history and own characteristics. If people ask me how do I see China, I say, well, she is going her own way and this is the way that right now is most appropriate for her. I would not try to antagonize the entire country.

You may have disagreements with some of the policies in our country, but that does not mean that I have to carry an attitude of antagonism with Beijing.

Why I say that the pan-Democrats have a very different attitude is, first of all, they lost the trust of Beijing. Basically everything delivered by Beijing, they have no trust and no confidence in that. Even with something done in good faith.

The lack of trust creates a lot of problems. In politics, if you earn the trust of the people you can actually bring about a lot of policies to improve their livelihood. Now because these people lost the trust of Beijing, due to many reasons, for example, the pan-Democrats think, well, right now the regime of China is not one favorable to us. We do not favor this political system. We don’t want the one-party system.

O.K., that’s their argument. My argument is very simple. Like it or not, this is the reality and China has to go on her own way. Also, I believe that if all of a sudden China carried out democratic elections tomorrow, that may create a lot of consequences, too. It is something that is very realistic, and I am a very pragmatic person. You have these ideals, good, but you also have to strike a balance with reality.

Q. So the pro-Beijing parties are more realistic, and the people on the pan-Democrat side are more idealistic?

A. You are quite right. Being realistic or being more pragmatic, and being more idealistic, it is always striking a balance between them. You have your own ideals, but if it is not [in accord with] reality, it doesn’t work. This is the difference between us and the pan-Democrats.

Q. What should the pan-Democrats do?

A. I would talk to the pan-Democrats and say: Right, you have experienced everything. Having done the 79-day Occupy movement, did you receive any concessions from Beijing? No. So, I’m telling you, that doesn’t work. My opinion is stop confronting Beijing on all fronts. Change your attitude. Carry out a sort of reconciliation with the central government. Once you establish a better relationship with the central government, things may change again.

Right now I am quite pessimistic about the political reform package. It seems likely it will be vetoed. What we are concerned about is the future of Hong Kong. How would you maintain a robust relationship with the central government? We have all this economic cooperation with the mainland. The city has to operate every day. And we still have a lot of livelihood issues here to be resolved. How are we going to do that?

When it comes to ransomware, you don't always get … END_OF_DOCUMENT_TOKEN_TO_BE_REPLACED

Peyton Carr is a financial advisor to founders, … END_OF_DOCUMENT_TOKEN_TO_BE_REPLACED