You are here: Home / Technology / SLAC Experiment Will Result in More Effective Medicines 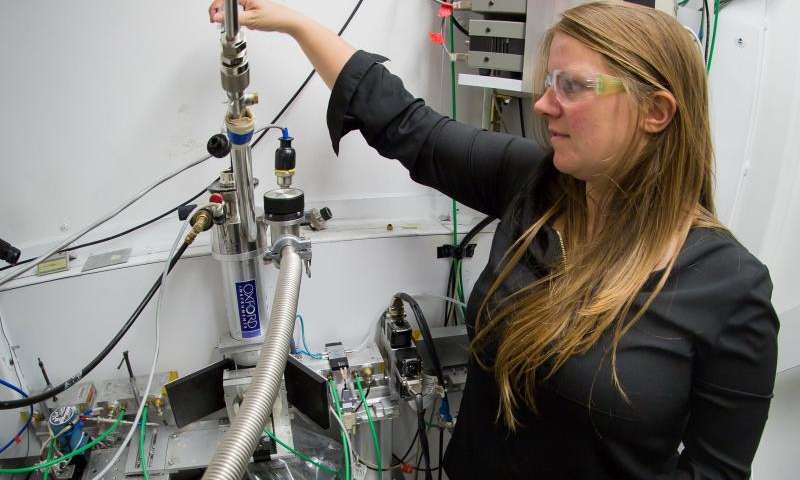 Researchers working at the Department of Energy’s SLAC National Accelerator Laboratory have discovered that a mere 9-trillionths-of-a-meter reduction in the length of a chemical bond dramatically boosts the reactivity of a family of molecules that helps keep humans and many other organisms healthy.

This result, reported recently in Nature Chemistry, is expected to help scientists design and manufacture new and more effective medicines.

Since cytochrome P450 was discovered more than 50 years ago, more than 11,000 variants have been identified in every kingdom of life, including animals, plants, fungi and bacteria. Some 57 different P450s are found in humans, typically in the liver, where they help break down poisons and unwanted molecules. They are also essential in the body’s manufacture of certain hormones, and chemists hope to be able to use them in the future to catalyze the creation of complex molecules for use in medicine and industry.

“Our bodies use P450s to perform one step in the metabolism of some 75 percent of pharmaceuticals,” Roach said. “And the P450s’ extreme selectivity can enable much more direct and efficient synthesis of a number of high-value hydrocarbons and organic molecules.”

Each cytochrome P450 is optimized to catalyze an initial “activation” step in a specific chemical reaction. They all share the same basic atomic structure: A central iron atom is surrounded by four nitrogen atoms, with a sulfur-based structure sticking out from one side of the ring. Activation creates an intermediate compound that has an oxygen atom double-bonded to the iron atom; it sticks out from the other side of the ring.

Because the P450s’ intermediate compounds were short-lived, chemists who were trying to learn how they worked tried studying a slightly simpler molecule, called CPO, which had a more stable intermediate. But they found it was much less reactive than the P450s – in some cases only one-fortieth as reactive. Researchers needed to know why, because a more reactive P450 can break stronger bonds, metabolize new medicines or make different final products.

The new experiments at SSRL were led by Penn State University Professor Michael Green, who was Roach’s PhD advisor. The research team used the absorption of X-rays by the intermediate forms of CPO and P450s to make ultraprecise measurements of their atomic structures. The results showed that the big difference in reactivity was caused by a miniscule, 9-trillionths-of-a-meter difference in the lengths of their iron-sulfur bonds.

Slight changes in hydrogen bonding near the central iron atom shortened the length of the P450s’ iron-sulfur bond by 4 percent. This changed the distribution of nearby electrons in a way that weakened and lengthened the iron-oxygen double bond on the opposite side of the ring. This, in turn, made it easier for the oxygen atom to carry out its part in the activation process, thus increasing P450s’ reactivity.

“SSRL is the only place that we could do these experiments with the necessary quality,” Roach said.

In their “News & Views” commentary on this research published in the same issue of Nature Chemistry, University of Illinois professors Ilia Denisove and Stephen Silgar said this result is a significant breakthrough that will provide the basis for researchers to design and make new catalysts and adapt P450-based systems for use in biotechnology.

When it comes to ransomware, you don't always get … END_OF_DOCUMENT_TOKEN_TO_BE_REPLACED

Peyton Carr is a financial advisor to founders, … END_OF_DOCUMENT_TOKEN_TO_BE_REPLACED