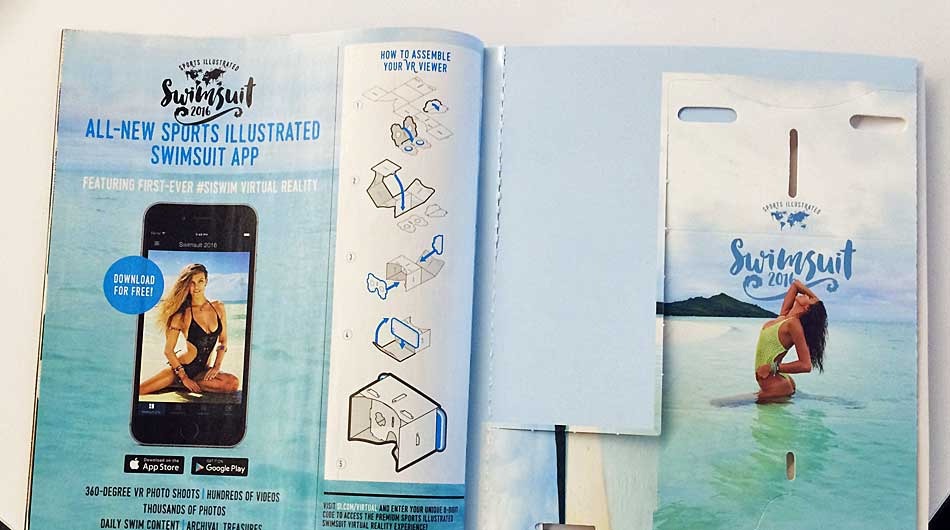 Figuring out ways to innovate print magazines in the digital era can be tough, but Sports Illustrated may have cracked the code with its latest attempt: a virtual reality viewer built into the magazine itself.

The Google Cardboard-style viewer is part of SI‘s 2016 Swimsuit Issue and, when combined with the SI Swimsuit Issue app, allows users to take an immersive trip to some of the tropical locales featuring the magazine’s swimsuit models.

The SI-branded viewer, which lays flat in the magazine like any other insert, took about 10 minutes to put together and even came with tiny lenses. Once constructed, the viewer was actually pretty solid and worked as well as any Google Cardboard device.

But will readers want to go through the trouble of putting the VR viewer together? Well, if you’re picking up the magazine’s swimsuit issue, it’s likely you’re already motivated to see as much of the sometimes racy imagery as possible. And if you’re really a fan of the ongoing series, the VR component doesn’t disappoint.

Introduced by Danish model Nina Agdal, the VR videos, which can be viewed using the VR viewer or directly on your smartphone, are incredibly well done. SI teamed up with Venice, California-based VR production house Wevr to produce the videos. And rather than merely present the models in the immersive settings, the videos also offer a few surprises that require you to shift positions and explore the environments.

The New York Times made waves last year for taking the plunge into VR and sending over a million subscribers Google Cardboard devices to view immersive documentaries. Based on the reaction online, that experiment was a success. But it’s hard to forget the images of those giant bags of blue plastic-wrapped VR devices sitting on the stoops of subscribers in New York. It was a great idea, but hardly practical.

However, SI‘s VR device, which is embedded in the magazine itself, is immediately easier to distribute, more lightweight and only mildly more challenging in terms of getting new VR users up and running.

The SI Swimsuit Issue VR experience is available on both iOS and Android devices and the app comes as a free download with some premium content.
Source link

When it comes to ransomware, you don't always get … END_OF_DOCUMENT_TOKEN_TO_BE_REPLACED

Peyton Carr is a financial advisor to founders, … END_OF_DOCUMENT_TOKEN_TO_BE_REPLACED