You are here: Home / Entertainment / Spotlight Characters Are Journalistic Avengers 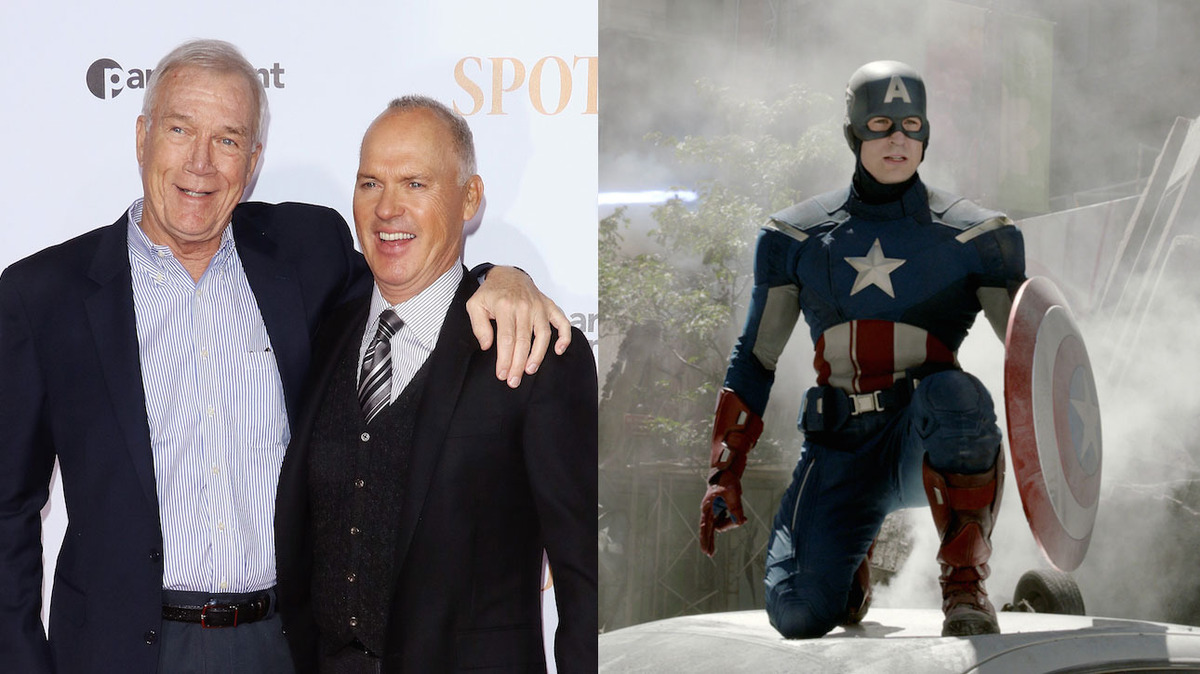 “We’ve created a new genre here,” were writer/director Tom McCarthy’s opening remarks at the L.A. premiere of Spotlight. “Journalists as superheros.” McCarthy’s quip got a laugh from the assembled crowd at the Directors Guild of America last week — but it also galvanized an idea.

The movie about the team of Boston Globe investigative journalists who unearthed a global sex abuse scandal in the Catholic Church was more than just a masterful accounting of a Pulitzer Prize-winning investigation (and heavyweight Oscar Best Picture contender).

Spotlight is about teamwork, about men and women of disparate strengths and weaknesses collaborating to accomplish a task far beyond the abilities of any individual.

And then the light goes on: The Spotlight characters aren’t just journalism superheroes. They’re the journalism Avengers.

Six core heroes in 2012’s The Avengers, six reporters and editors at the core of Spotlight. Maybe it’s a bit silly for a gravely serious subject, but you tell us if this isn’t stacking up:

“I like to think of myself as a player/coach,” Robinson says early on in Spotlight, more or less describing Captain America’s role as the Avengers’ best hand-to-hand combatant, but also its skipper. Like Cap, Robinson is a man of unbending principle who’s also distrusting of authority; neither is quick to divulge everything to superiors. And when either looks you in the eye and says a thing’s getting done, it’s getting done.

You saw that coming, right? Well, it’s more than just a convenient actor crossover — like Bruce Banner, Rezendes is the understated bulldog, content to be absorbed in his work, all while struggling to piece together a personal life. He’s a little dark and possibly a tad socially awkward, sure, but generally an agreeable guy … until the rage monster comes out. If Ruffalo is to be nominated for an Oscar, it’ll be for that moment of Hulked-out fury in Spotlight.

Thor is the only non-Earthling member of The Avengers; Marty Baron is the only non-Boston native in Spotlight. The Globe‘s new editor-in-chief brings an outsider’s perspective to the paper, and gets the ball rolling on the church abuse investigation; Thor’s arrival opens the Avengers’ eyes to the presence of Asgard and the other realms and gets the ball rolling on the central conflict. Both Baron and Thor are men of few words, but they make them count. And when the hammer comes down? Best step aside. (See also: neatly trimmed beards, Thor’s distaste for adjectives. It’s true. Look it up.)

More than just the sole female member of both the Spotlight and Avengers teams, Pfeiffer, like superspy Natasha Romanoff, is an expert “soft” interrogator: She knows, more than any of the boys, how to get the information she needs out of anyone by properly listening. She’s fierce, relentless and can take out a room full of goons with her bare hands. Actually, that’s not depicted in Spotlight at all. But don’t put it past Pfeiffer.

Slattery plays Tony Stark’s father Howard in the Marvel Cinematic Universe, which is … pretty much the strongest connection we’ve got here. But consider: Bradlee, a slick-talking, handsome fella of a certain age and a senior member of the Globe‘s edit staff, is a bit of a maverick who doesn’t like being told what to do. He’s a reluctant hero, he’s made some mistakes in the past, and as we know from Mad Men, looks good in a suit.

The unsung hero of the Spotlight team — no flashy powers, just a lot of focus and grit. Carroll’s eagle-eyed spotting of church directories in the Boston Globe‘s vast basement archive was the key to the case. Though he was no less an important figure in the success of the Catholic church scandal story, he suffers a bit from a lack of screen-time. (He’s also the closest thing the Spotlight team has to a family man, a detail about Hawkeye we don’t learn until Avengers: Age of Ultron.)

Though we’re technically out of core Avengers at this point, you could also make the case that lawyers Eric MacLeish (Billy Crudup) and Mitchell Garabedian (Stanley Tucci) belong in this exercise.

And that’s easy enough to accomplish:

MacLeish, the deeply conflicted trial lawyer who made a cottage industry of meager, under-the-table settlement deals between victims and the Catholic church, is Loki — a little good, a lot bad, and doing it all with flair. Like Loki, MacLeish disappears in shame, though there is hope for his redemption.

Garabedian, the other victims’ lawyer whose above-board approach made him a more press-friendly informant, is the one and only Nick Fury — an elusive figure who guides the Avengers when he’s available, which he rarely is because he’s really, really busy OK? He’s got a lot of other things to worry about. And while of course he wants to see the Avengers succeed, all he really has the energy for is to give them the tools they need and let them do their thing. OK? OK.

When it comes to ransomware, you don't always get … END_OF_DOCUMENT_TOKEN_TO_BE_REPLACED

Peyton Carr is a financial advisor to founders, … END_OF_DOCUMENT_TOKEN_TO_BE_REPLACED