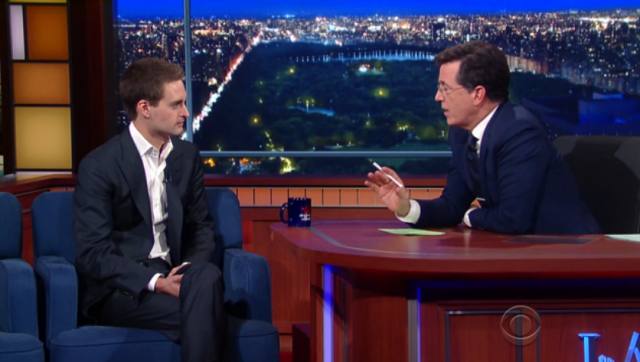 “You are my fifth billionaire of the show,” Stephen Colbert humblebragged to the visibly jittery CEO of Snapchat on Wednesday night. “I’m collecting them now.” In his first weeks as host of The Late Show, Colbert hasn’t just planted his stake in the late night wars, but attempted to move beyond the usual late night guest lineup of celebrities, politicians and animal handlers.

In the process, he is quickly established the show as the newest stop on the media tours of top executives from the world’s most prominent technology companies.

The powerful CEOs of Apple, Uber, Snapchat, Tesla and SpaceX (okay, fine, the last two are the same person) have all sat down for interviews on The Late Show during its first month on air. And the CEOs of more buzzy technology companies like Airbnb and Netflix are still on tap for future episodes.

“I want to be publicly curious,” Colbert explained about his approach in one interview shortly before his show kicked off.

Emily Lazar, co-executive producer of The Late Show, has put it more bluntly in recent interviews: “These innovators are as powerful right now as any other person who you would have on a late-night talk show. We’re just going where the heat is.”

Unlike many of their interviews with the usual suspects — CNBC, Bloomberg BusinessWeek, Charlie Rose (also part of Bloomberg) and analysts on earnings calls — the CEOs who appear on Colbert are hit with questions that touch on morality, personal backgrounds and bigger picture issues. They’re also bombarded with jokes.

As an example, Colbert reminded Spiegel that his company had turned down $3 billion from Facebook.

Colbert followed up with this line: “If I take out a camera, can I take a picture of your balls right now?”

Critics will rightly say Colbert’s interviews are too brief and, as a result, don’t actually break any news of substance. That may be true, but the exposure of business executives is a new practice for a major show about news and pop culture. The show has already proven to be an unusually colorful and sometimes candid forum for execs with the potential to bring key business figures and issues to a different audience.

Tesla and SpaceX CEO Elon Musk made headlines by floating the idea to Colbert that we could nuke Mars in order to warm it up and make it inhabitable. Uber’s CEO Travis Kalanick was forced to depend the ethics of surge pricing in times of crisis and developing driverless cars that could eventually make its thousands of drivers obsolete. Snapchat’s Evan Spiegel was pressed on whether the service really erases user content forever.

Colbert convinced Apple CEO Tim Cook to open up about his decision to come out as gay for the first time since his original announcement last year. “It became so clear to me kids were getting bullied in school, kids were getting basically discriminated against, kids were even being disclaimed by their own parents,” Cook said in the interview. “And I needed to do something.”

It was one of the most revealing discussions — however brief — that Cook has had about his sexual orientation.

Colbert’s executive interview style has followed a fairly consistent formula to date: He begins with a flurry of jokes to put the guest at ease, throws out at least one or two funny softball questions and then eases his way into a more varied and often critical set of inquiries.The host frequently namedrops other executives he’s spoken with on the show to bait his current guest — asking Cook to respond to Uber’s Kalanick saying Apple is building self-driving cars, for example. He also channels the thinking of average viewers, both jokingly and seriously, whether it’s complaining to Cook’s face on behalf of all Apple customers about forcing everyone to switch to a new type of connecting cable or repeatedly asking Musk if he’s a super-villain.

During the interview with Kalanick, two cab drivers in the audience interrupted to criticize Uber’s impact on the cab industry and their jobs. Rather than dismiss the hecklers outright, Colbert listened and later incorporated their concerns into the interview, according to one audience member in attendance who tweeted about it.

“What is your response to, ‘Uber kills professional good-paying jobs and it’s unfair to the drivers and it’s destroying the cab industry?'” Colbert asked Kalanick.

No ‘Colbert Bump’ Just Yet

On his previous show, Colbert was fond of touting his power to increase awareness for local and national political figures who appeared on his show, referring to it affectionately as The Colbert Bump.

So far the bump doesn’t seem to apply to the top execs at international technology corporations.

Kalanick and Musk each show a bump in media mentions the day of and the day after appearing on Colbert’s show, but far from their peak mentions, according to data provided to Mashable by Parsely, which tracks articles from 400 digital publishers in its network.

Perhaps that might change if Colbert borrows a page from his colleague and current executive producer Jon Stewart and releases more extended interviews online for the executives he gets on the show, covering that much more ground. If he can do that, Colbert may just establish himself as the Charlie Rose of late night television.

When it comes to ransomware, you don't always get … END_OF_DOCUMENT_TOKEN_TO_BE_REPLACED

Peyton Carr is a financial advisor to founders, … END_OF_DOCUMENT_TOKEN_TO_BE_REPLACED