You are here: Home / Sports / Stephen Curry Has Off Day Against Knicks, But Warriors Still Have a Field Day 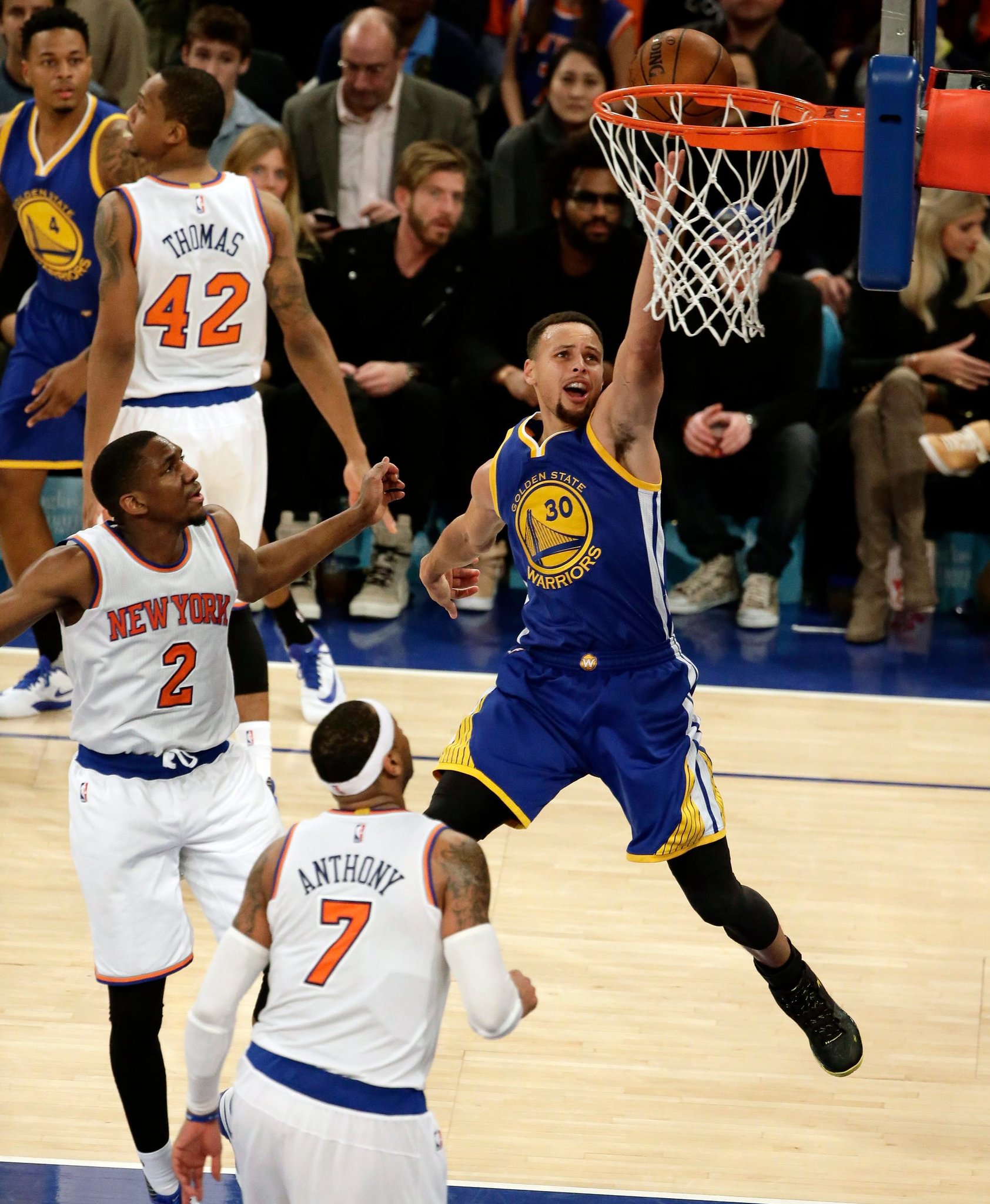 Knicks Coach Derek Fisher answered questions for 14 minutes at a news conference on Sunday afternoon before the Knicks played the Golden State Warriors at Madison Square Garden. A large proportion of the questions, to Fisher’s apparent chagrin, involved the Warriors.

Where did he think the Warriors stacked up against history’s best teams? What made them so good? How would the Knicks handle a team with so few weaknesses? Was there any way to guard Stephen Curry?

Fisher answered some of the questions. Others he brushed aside. At one point, though, he wondered aloud whether the drift of the questions verged on disrespect toward the Knicks’ players.

“We have to walk out there expecting to win,” Fisher said. “I don’t know if you guys are going to walk in there and ask them the same questions you’re asking me, but I would be offended if I was them.”

The Knicks’ expectation did not match reality. The Warriors, as nearly everyone else probably expected, cruised to a 116-95 victory, looking far superior in front of a buzzing announced sellout crowd of 19,812.

The only surprise was that Curry, the league’s most valuable player last season, stumbled to a substandard night. But Klay Thompson scored 34 points, shooting 14 of 18 from the field, and Draymond Green notched a triple-double (20 points, 10 rebounds, 10 assists) to lead Golden State. Carmelo Anthony finished with 24 points and 10 rebounds for the Knicks.

“You try so hard to stop one guy, and another guy gets going,” said Anthony, who left a scratch on Curry’s forehead in the fourth quarter when they were matched one-on-one.

The Warriors, the league’s reigning champions, improved to 44-4 with their seventh win in a row, while the Knicks dropped to 23-27 and have lost five of their last six games.

The only encouraging thing for the Knicks heading into the game was that Golden State had a misstep on Saturday night, blowing a 24-point second-half lead and almost losing to the lowly Philadelphia 76ers.

The Warriors said they were relieved to escape with a win and happy to be in New York.

“It’s a brilliant place to play,” Warriors Coach Steve Kerr said before the game. “Everyone loves coming to the Garden. The fans are as knowledgeable as any in the league. It’s the mecca. For a lot of guys, it’s the highlight — especially if you’re in the West, and you’re only coming here once. You want to show well. You want to play your best.”

Curry, who recorded his career-high point total of 54 at the Garden in 2013, seemed ready. Two hours before the game, he posted a picture of 33rd Street to his Twitter account and wrote, “Let’s do this MSG!”

But Curry, who was averaging 29.7 points per game entering Sunday, was not his normal devastating self. In the first quarter, in a span of seconds, he missed two rapid-fire 3-point attempts from the corner and mishandled an easy pass for a turnover. He missed five of his first six shots and never found his rhythm. He finished with 13 points (5 of 17 from the field), 4 rebounds and 4 assists.

Taking advantage of this, the Knicks led, 20-18, after the first quarter. It was Golden State’s lowest output in any first quarter this season. The Warriors also committed eight turnovers. But their slow start and Curry’s poor touch did not last, and Golden State built a 55-49 lead by halftime before sauntering to the finish.

“They went to more of the level they’re capable of and got some separation,” Fisher said of the Warriors’ strong finish.

Thompson was magnificent, and the Knicks could not track his movement. He tiptoed back and forth and side to side, making cuts at unexpected times, punishing any slack defense from long range.

Green was unmanageable, too. He posed matchup problems for the Knicks’ defenders all night, muscling them away or slipping past them off the dribble or firing shots from deep. He finished 9 of 9 from the field. The triple-double was his ninth of the season, the most in the league.

“They do so many little things,” Anthony said of the Warriors. “It’s a game within a game.”

Knicks point guard Jose Calderon missed his third straight game with a strained groin. Langston Galloway and Arron Afflalo shot a combined 5 for 25 from the field.

Kristaps Porzingis, who picked up two fouls within minutes of the game’s start, never found his footing and finished with 14 points. He also looked lost at times defending Green and said he would have to do better.

The Knicks’ desperation was embodied in a moment with 6 minutes 30 seconds left, when Anthony, losing his balance in the paint with his back to the basket, heaved a no-look lob shot over his shoulder. It missed badly.

When it comes to ransomware, you don't always get … END_OF_DOCUMENT_TOKEN_TO_BE_REPLACED

Peyton Carr is a financial advisor to founders, … END_OF_DOCUMENT_TOKEN_TO_BE_REPLACED