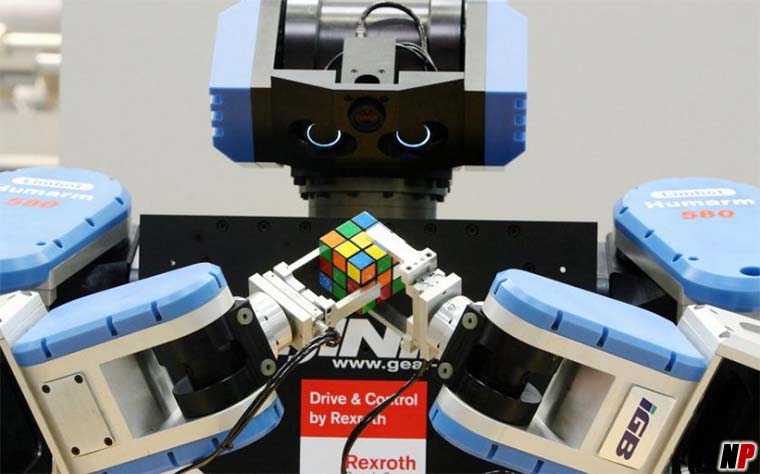 The Sub1 Reloaded robot managed to solve the Rubik cube in 637 milliseconds, the best time from the invention of the cube, 30 years ago. The robot managed to solve the 3D puzzle ten times faster than the man who holds the world record. In more than half a second (0,637 seconds), ‘Sub1 Reloaded’ managed to make all parts of the Rubik cube to show a single color. He managed to exceed the previous record of 0,887 seconds, owned by a previous version of the same robot that used a different processor.

The German technology company Infineon organized the event at the Electronic Market in Munich, as a way to underline the technology of the machines that rule themselves. The company presented here one of the ‘Sub1 Reloaded’ microchips. ‘A huge power of calculation is necessary to resolve such a complex puzzle with a machine. In the case of the ‘Sub1 Reloaded’, the capacity of control was ensured by a microchip from the family AURIX of Infineon, similar to that used in the assistance systems on the driver’, informs Infineon.

Infineon claims that there are 42 Quintilian possible combinations of the Rubik cube’s colored squares. The attempt to overtake the world record began by pushing a button. The cameras with sensors had the blanking plugs removed so that the computer could see how the cube was assembled. The calculation chip, or the machine’s brain, determined the fastest solution. The execution command was sent to a number of six arms with controlled movement. Although any Rubik cube can be resolved in only 20 movements, the Infineon’s engineer Albert Beer didn’t designed the computer to use less moves. The machine was programmed to achieve the best time, which allowed to ‘Sub1 Reloaded’ to make additional movements in order to achieve the objective.

When it comes to ransomware, you don't always get … END_OF_DOCUMENT_TOKEN_TO_BE_REPLACED

Peyton Carr is a financial advisor to founders, … END_OF_DOCUMENT_TOKEN_TO_BE_REPLACED