You are here: Home / Business / A subway station from London filled with cat photos in an innovative project of outdoor advertising 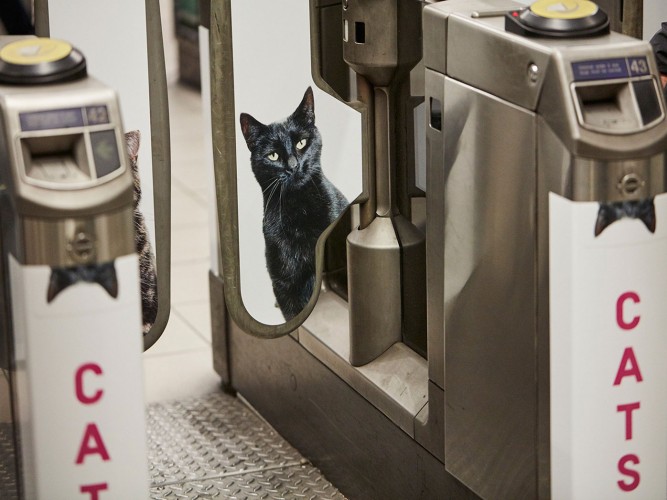 A subway station from the South of London was filled with photos of cats by a British group specialized in the arts and who wanted to offer the people who travel with the subway a new perspective upon the idea of subway advertising. The Clapham Common subway station has 68 images of cats posted on the walls, the project being called, of course, CATS (Citizens Advertising Takeover Service). The London group specialized in art projects explained that through this project they want to make people that use the subway to see the idea of advertising on the subway station’s walls from another perspective. The team of this project says on the online platform Kickstarter that would be great for us to not worry for a vacation that we cannot afford or for the car we don’t need or for the body we don’t have.

They also tell the people to imagine a world in which the public spaces make them feel ‘pawsitive’. James Turner, the founder of Glimpse states that the whole team hopes that people will get down on the subway, will like what they see and they will have an experience in the subway station. He adds that the people working on this project hope the people will think about the way the fix and hard to change things can be changed if people work together. The project is promoted on the Kickstarter online platform to receive financial help and it has a fast success, the people already making their financial contribution to raise the $30.000. The photos of the cats were made in two cat centers and as a result of this project, many of these cats were adopted. It is for the first time in the 153 years of London subway’s history when such a project takes place in the subway stations.

When it comes to ransomware, you don't always get … END_OF_DOCUMENT_TOKEN_TO_BE_REPLACED

Peyton Carr is a financial advisor to founders, … END_OF_DOCUMENT_TOKEN_TO_BE_REPLACED