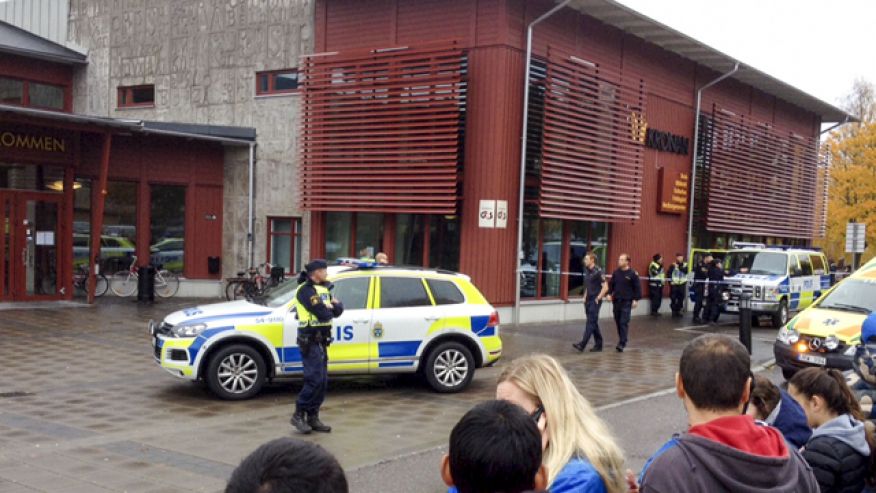 A teacher was killed and two students were seriously injured when a masked man carrying a sword attacked a school in southwestern Sweden, officials said Thursday. Swedish officials told the Associated Press that the attacker was in serious condition after being shot by police.

Health officials said the two seriously injured students were 11 and 15 years-old and were admitted to the NAL hospital from the Swedish school, along with the assailant.

“Some of them have serious injuries and are being operated on.” He added that the deceased victim was pronounced dead at the scene.

Police spokesman Thomas Fuxborg told The Associated Press the attacker was in his 20s and carried more than one weapon, including “at least one knife-like object.” Fuxborg said police fired two shots, one of which hit the attacker.

According to Swedish media, the school had held a meeting to discuss teachers’ worries that the school was too open, with a cafe for adults that meant the school could not control who comes in.

The Dagens Nyheter newspaper said students must go through the cafe to reach the school’s own cafeteria and other parts of the building.

The school has 400 students from preschool to high school. A live feed on the website of the local Goteborg Tidning daily showed people standing outside a red-brick building with police cars and ambulances parked outside.

Swedish Prime Minister Stefan Lofven cancelled his schedule and was heading to Trollhattan.

When it comes to ransomware, you don't always get … END_OF_DOCUMENT_TOKEN_TO_BE_REPLACED

Peyton Carr is a financial advisor to founders, … END_OF_DOCUMENT_TOKEN_TO_BE_REPLACED