You are here: Home / Technology / Target.com Crashes Because of Online Traffic 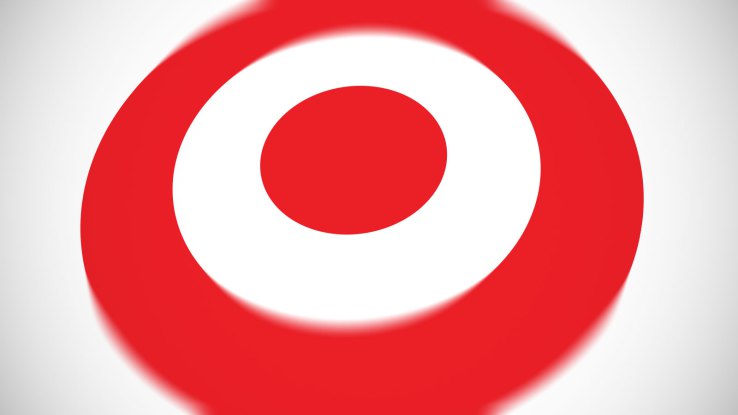 A number of sites have buckled under the pressure of increased traffic as more Americans turned to online shopping over the Black Friday weekend than those who visited brick-and-mortar stores, according to new data from the National Retail Federation.

And with Cyber Monday now in full swing, another high-profile retailer is seeing the impact of this increased flood of online shoppers: Target.com is the latest to crash, with its online site displaying a message to visitors citing “high traffic” as a cause of its delays.

“So sorry,” the message reads, “but high traffic’s causing delays. If you wouldn’t mind holding, we’ll refresh automatically & get things going ASAP. Thank you for your patience!”

Target went down around 10 AM ET this morning, but came back intermittently around 10:40 AM ET. Currently, there appear to be regional outages for the site, according to early data from web performance and monitoring solution provider Catchpoint, which has been tracking the performance of e-commerce websites over this holiday shopping season. 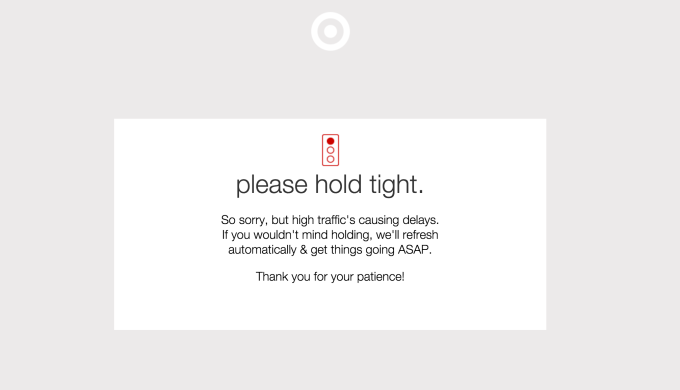 Cyber Monday has historically been the top online shopping day of the year as consumers returned to work then browsed online for all the deals they couldn’t find at local retailers’ after Black Friday weekend wrapped. However, this year, the NRF reports that 103 million Americans shopped online over Thanksgiving through Black Friday weekend, more than the 102 million who shopped in stores.

That shift in consumer behavior has not been without its casualties, however. On Black Friday, Neiman Marcus’ website experienced a major outage, which caused it to miss Black Friday altogether. The company responded by having a “Black Saturday” sale instead, but still faced intermittent outage through Sunday morning, only stabilizing around 5:30 AM ET.

Other sites, including Newegg and HP suffered some outages, and buzzy newcomer Jet.com saw some delays on desktop and on mobile over the weekend, but these were minor. Other sites like Saks (mobile), Victoria’s Secret, (all weekend), Shutterfly, and Footlocker had problems as well, says Catchpoint.

The increased web traffic even extended to impact PayPal, whose service also suffered another outage this morning, causing problems for those shoppers trying to buy from eBay and other online stores where the payment service is offered as a checkout option. According to PayPal’s event notification page, the live site and the API experienced a “major impact” to their operations both yesterday and this morning. On Sunday, around 70% of those trying to use PayPal could not due to its outage, where response time slowed to as long as 22 seconds.

This morning, around 20% could not use PayPal, with response times slowing to around 14 seconds. Times this slow mean that most users would abandon the payment process. The Monday event is still flagged on PayPal’s site as being “open,” meaning unresolved.

Target now claims its outage is due to heavy traffic from its Cyber Week promotion, which has forced it to meter traffic to the site.

“As a part of our Cyber Week promotion, today for the first time, Target is offering 15 percent off virtually everything online. Both traffic and order volumes are exceeding Target’s Thursday Black Friday event, which was our biggest day ever for online sales,” a spokesperson tells TechCrunch. “To help manage the volume, we have been metering traffic to the site. We have teams working diligently to restore Target.com to full functionality.”

Early data on Cyber Monday has it pegged to be a record-breaker. According to Adobe, close to half a billion ($490 million) has been spent already between midnight and 10 AM ET. The firm expects Cyber Monday to reach $3 billion this year, which would make it the largest online sales day ever.

When it comes to ransomware, you don't always get … END_OF_DOCUMENT_TOKEN_TO_BE_REPLACED

Peyton Carr is a financial advisor to founders, … END_OF_DOCUMENT_TOKEN_TO_BE_REPLACED