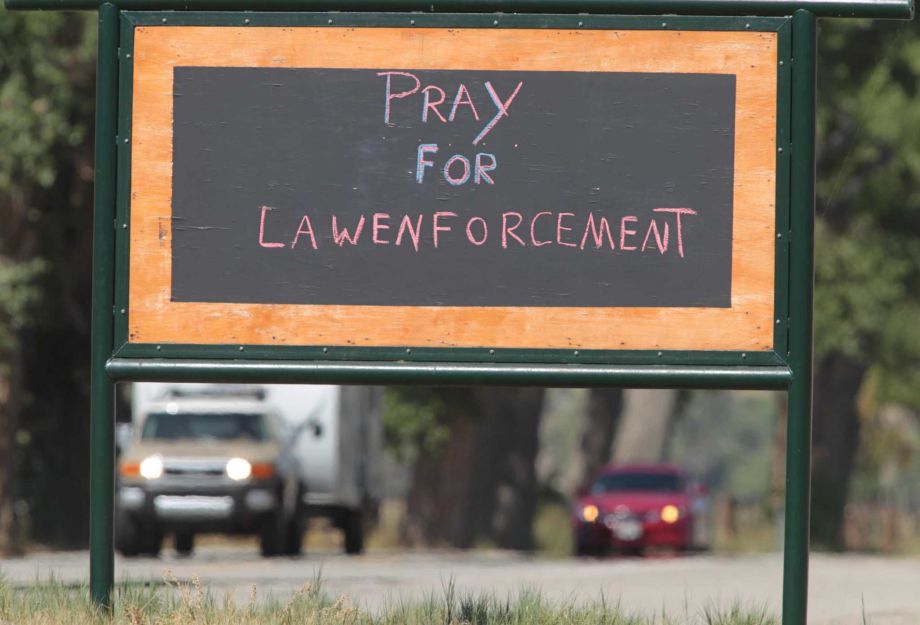 A man suspected of killing a retired dentist, taking three men hostage and wounding two deputies was likely traveling a section of the famed Pacific Crest Trail to elude searchers during an 18-day manhunt, authorities said.

Investigators believe 34-year-old Benjamin Peter Ashley was headed back to the trail when he was confronted and shot by deputies Saturday behind a mini-mart in Inyokern, Kern County Sheriff Donny Youngblood said.

An autopsy performed Monday determined Ashley’s death to be a homicide because two of the wounds inflicted by officers were fatal.

Youngblood said the autopsy also found that a self-inflicted wound was fatal. The full report hasn’t been completed and more details were pending.

Asked about a motive for the crime rampage, Youngblood said, “the mindset of this man we’ll never know.”

Ashley is suspected in the rampage that began on July 28 when a gunman took three men hostage in a cabin in the Twin Oaks area after they confronted him about squatting on the property.

Authorities said the gunman held the victims hostage for more than an hour and threatened to kill them before they managed to escape.

The search intensified two days later, after retired dentist David Markiewitz, 64, was found dead in another cabin in Jawbone Canyon, about 10 miles from the site where the men were held hostage.

On Aug. 1, two SWAT team members involved in the manhunt were shot and wounded by as they searched a mobile home in Kelso Valley. One deputy was shot in both arms, and the other was grazed.

Authorities closed in on Ashley on Saturday when he went to purchase $100 worth of water, candy and snacks at Brady’s Mini-Mart in Inyokern. The terrified clerk recognized Ashley’s hazel eyes from media reports and texted his sister, who called authorities about the dirt-covered hiker.

Deputies responded immediately, catching Ashley after he exited the rear of the mini mart on his way back to the Pacific Crest Trail.

Ashley, who authorities described as a transient estranged from his family, was found with more than 100 rounds of ammunition, three guns from the cabin of the retired dentist and another gun from the site where he had exchanged fire with the wounded deputies, authorities said. He was also carrying a 100-pound backpack.

Efforts to reach his family were unsuccessful.

Youngblood said Ashley took a shotgun from the cabin where he kidnapped the three men, and the weapon was used to kill Markiewitz before it was abandoned.

Still, Youngblood said investigators will check all the weapons for DNA to ensure Ashley was the gunman.

The search region had grown from roughly 5 square miles to more than 100 square miles of mountainous high-desert terrain in Central California. The mini-mart was just outside the search area.

Searchers had to deal with triple-digit heat, Youngblood said.

“I’m amazed that he was able to elude (searchers) for two weeks in that kind of heat because you have to stay hydrated,” Youngblood said. “I may have underestimated him, because this is a lifestyle.”

Four residences were found to be burglarized, but authorities don’t know if those were connected to Ashley.

During the manhunt, two elementary schools and a middle school were shut. Authorities also closed a stretch of Pacific Crest Trail.

When it comes to ransomware, you don't always get … END_OF_DOCUMENT_TOKEN_TO_BE_REPLACED

Peyton Carr is a financial advisor to founders, … END_OF_DOCUMENT_TOKEN_TO_BE_REPLACED