You are here: Home / Featured / ‘Terrorist’ attack at the Louvre Museum in Paris, France 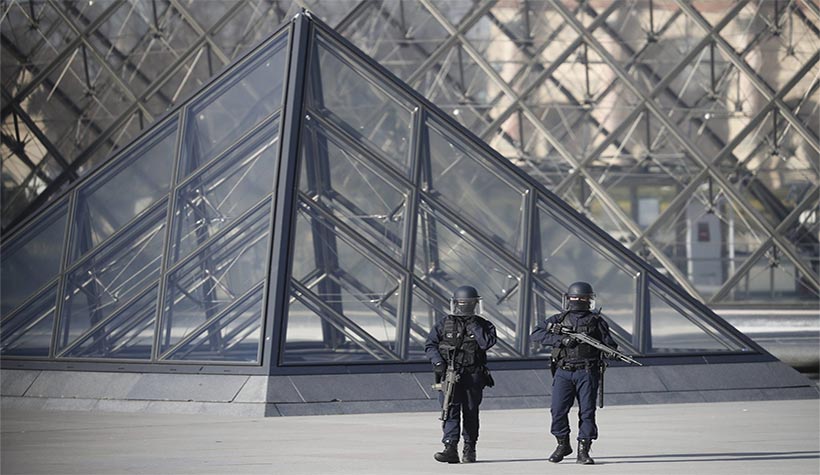 A man with unknown identity attacked on Friday morning with a white weapon a military patrol, yelling ‘Allah Akbar’, in the vicinity of the Louvre Museum in Paris, before being seriously injured by a soldier, said the French premier Bernard Cazeneuve, reports the AFP. The soldier was slightly wounded and the attacker was ‘injured in the abdomen’, said the head of the police in Paris, Michel Cadot.

‘We are dealing with an attack from an individual who was clearly aggressive and represented a direct threat, and whose comments lead us to believe that he wished to carry out a terrorist incident. There was also a second individual who was behaving suspiciously, who has also been detained, but for now there does not appear to be a link between that individual and the attack,’ he said. According to the police chief, a man armed with a machete, ‘launched’ on the policemen and the military men at the Carousel, in the vicinity of the museum, threatening and shouting ‘Allah Akbar’.

The military man shot five bullets and injured the attacker. The public from the museum, about 250 visitors, were kept at a distance, and in an area of Louvre, which is ‘secure’, indicated the head of the police. Louvre, the largest museum in the capital of France, has been closed. Also, for safety reasons, the subway station the Palais Royal – Musée du Louvre has also been closed, communicated the management of the public transport in Paris.

The attack occurs in a context of high Jihadist threat in France, a country hit in the past two years by an unprecedented series of attacks. After the terrorist attacks from Paris in November 2015, the military men have been patrolling daily on the streets of the capital and in the vicinity of the tourist objectives.

When it comes to ransomware, you don't always get … END_OF_DOCUMENT_TOKEN_TO_BE_REPLACED

Peyton Carr is a financial advisor to founders, … END_OF_DOCUMENT_TOKEN_TO_BE_REPLACED