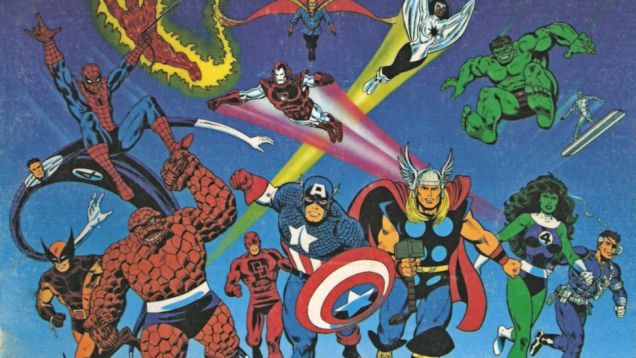 The 1980s Marvel Super Heroes RPG was well-designed and was supported by a ton of supplements and adventures. But the greatest thing about it was the FASERIP chart, the one chart that could tell you once and for all who would win in a fight, Thor or the Hulk.

If you played it, you remember that rainbow chart of power levels and attack results. At first you’d nod sagely looking through the character rosters, noting that Nightcrawler has Remarkable Agility, and Colossus has Monstrous Strength. But what’s this? Thor has Unearthly Fighting ability? But there are more columns beyond that. Shift X? Shift Y? Who has Shift Y Strength?

Old-school RPGs catch a lot of grief for being over-complicated, but you could run Marvel Super Heroes with that one chart, more or less. Character creation was kind of a mess — the random ability rolls were a throwback to D&D (it was published by TSR, after all). Today it would use a point-buy system. But Designers Jeff Grubb and Steve Winter crafted a system that lets you both emulate and fight against your favorite Marvel heroes and also create your own characters. The powers were flexible enough to let you recreate almost any type of superhero or villain you could think of, without turning into a brutal math grind (which point-buy systems often fall into).

But there’s no sense in me droning on about the game, because there’s a much better way to look at the creativity and ridiculousness it inspired. I still have my original boxed set, complete with characters I made and an adventure I designed. Let’s take a look!

I’m certain I still have the little paper stand-up character minis somewhere (those were amazing), but I couldn’t find them. That orange character sheet might be from the Secret Wars 2 Roster Book.

I never really followed through on my artistic ambitions. It’s worth pointing out that when I was 12 or 13 or whenever this was, every character I created had Wolverine claws.

Here are the stats for a character I made named Gravedigger. Carefully note how skillfully I combined every single thing I was interested in at age 13 in one concept. He’s a superhero named after a monster truck, but his key ability — Shapeshifting (Mechanized) — means he’s basically a Transformer. Who could turn into a monster truck. Oh and he has a “combat tail.” Given the option, always go with a combat tail.

I was pretty careful about making his backstory logical. His only contact is the “International Archeological Institute,” which is 100% sensible for a transforming monster truck with a tail. I have no memory of making this, so it’s possible I’d suffered a concussion.

This is what I decided Gravedigger looks like — basically a Nintendo controller with a face and shoulder rockets.

When we played RPGs as kids I was often the GM. Not because I was good at it or anything, but because (I realized upon reflection) I was kind of a control freak. Anyway, here is a map I made for an adventure. The evil corporation the heroes will be going up against is called “Hirokila,” which is some primo 12-year-old pun action. Let’s talk about why I thought there would be two nightclubs in the warehouse district, and how homoerotic the nightclub names are: “The Cage” and “Fellow’s.” I’m almost positive I wasn’t intentionally making references to gay bars when I was 12, but seriously? I called it Fellow’s? Well, I found my write-up of the adventure too, so let’s take a look oh god.

I’m not sure I can stop laughing long enough to write about this. Okay, first, yes, Fellow’s is “Wild!” Indeed. Meanwhile, we have Electro over in Warehouse 1, “greasing the nightwatchmen.” And Hawkeye, whose real name is, of course, Clint, is “disguised as a street fighter named Clint.”

I threw in a corrupt police precinct, so obviously I was way ahead of my time (this was at least 10 years before The Shield debuted). Then there’s the burn clinic. No worries, it’s just a normal burn clinic. Why a burn clinic, 12-year-old me? Why not just a hospital, or a gas station, or another nightclub? Why did I assume everyone would just know what a “normal” burn clinic was like?

There is some top notch adventure design going on here too, like Wolverine investigating “with a 70% chance.” Of freezing rain? Of him wandering into a lumberjack bar? Of my friends and I never actually playing this adventure because we spent seven hours drawing our characters? Hey, let’s throw some more villains around; how about Lizard just trashing a warehouse for no reason? And “various drunks.” My handwriting still looks exactly like this, by the way.

For what it’s worth, if the players had ever made it to the end of this adventure and met top boss Kingpin, of course I had him wearing massive Kingpin power armor. Which is entirely possible under the rules of the Marvel Super Heroes RPG, and why it remains one of the best superhero RPGs ever (although I like a lot of the newer ones quite a bit too).
This entry passed through the Full-Text RSS service – if this is your content and you’re reading it on someone else’s site, please read the FAQ at fivefilters.org/content-only/faq.php#publishers.

When it comes to ransomware, you don't always get … END_OF_DOCUMENT_TOKEN_TO_BE_REPLACED

Peyton Carr is a financial advisor to founders, … END_OF_DOCUMENT_TOKEN_TO_BE_REPLACED