You are here: Home / Technology / The Best in 10 Years, BlackBerry Priv 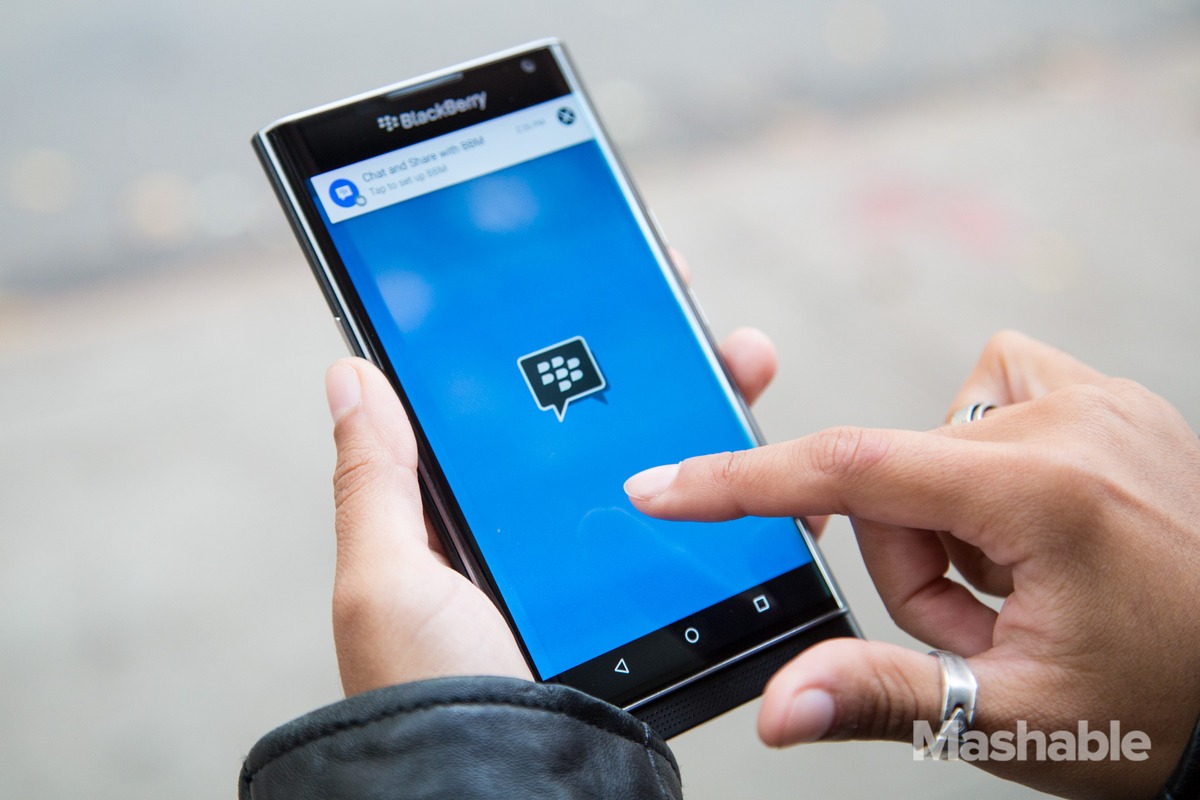 Hello, old friend. I can’t say I’ve missed you, but it’s still a pleasant surprise to run my digits over your surface. The bumps and ridges feel, after so much time, odd, yet strangely familiar. I honestly can’t believe it’s been almost five years since I gave up my last BlackBerry and touched my last BlackBerry keyboard.

My last BlackBerry, a Bold 9650, was a small, yet fairly traditional BlackBerry. It had a pretty small screen and the full classic QWERTY keyboard right below it. Before that I had the large-screen (for the time) Torch with a slide-out keyboard. Aside from its lackluster performance, I kind of loved that phone.

However I, like many others, left the BlackBerry behind and then watched in disbelief as the company stumbled through the next half decade with a parade of bad product and strategy decisions.

As I hold the BlackBerry Priv and run my fingers over its physical keyboard, I realize it could signal the official end to the bad choices. It’s also the very first BlackBerry device to run — drumroll, please — Android (version 5.1.1).

And here’s the really good news: It’s a good marriage.

Instead of seeming like an unwanted tenant, Android is right at home with BlackBerry. And why shouldn’t it be? The Priv is, in many ways, just like the dozen or more phablets on the market. It has a big 5.4-inch, 2,560 x 1,440 OLED screen that even curves at the edges like a Samsung Galaxy S6 Edge+. But it is, in one way, nothing like most Android devices.

Hidden behind the screen is the physical BlackBerry QWERTY keyboard I’ve been caressing. To access it, you slide up a custom aluminum sliding mechanism that extends the length of the phone by a little more than an inch. The construction on this feels quite good, like it could hold up to thousands on slides.

Overall, the keyboard looks a little bit vertically squished compared to other BlackBerry keyboards I’ve used (at least what I remember), but otherwise looks, feels and, mostly, works the same. The backlit keys, for instance, have a unique design that helps your fingers quickly find the separation between keys without looking at them (it’s been so popular over the years, that others have tried to imitate it and have been sued for it). It also puts numbers and punctuation behind the Alt key, just like all the other BlackBerry Keyboards.

Put simply, if you have ever used a BlackBerry keyboard, you will be right at home with this one. If you have not, you may still like it.

You can, obviously, completely ignore the keyboard — but then why would you buy this phone? — and instead rely on the onscreen keyboard. It’s good, except for its tendency to crowd the keyboard interface with too many text alternative and completion overlays. It’ll even put a whole word replacement on top of the space bar. If that’s the word you originally intended to type, great. If not, you could accidentally replace a word just by typing a space.

More than a keyboard

One reason non-BlackBerry aficionados could appreciate the Priv is that the keyboard also functions as a capacitive touchpad, and this is easily one of my favorite hardware features of the device. You can run your fingers lightly over the keys to scroll or move a cursor on the screen.

I admit, I’m so unaccustomed to using a physical keyboard that I often had to remind myself to slide it out and start typing. I also found that I’ve become much better at using a virtual keyboard. My speed on the hardware one was almost slower than on the physical one. It looks like my keyboard muscle-memory is all but gone. Perhaps if I used it more consistently.

Despite the inclusion of a keyboard, the Priv is still a pleasingly thin phablet, measuring just 0.37 of an inch deep and weighing 6.8 ounces. That’s the same weight as the iPhone 6S Plus, which has a slightly larger screen and is more than 0.079 inch thinner than the Priv. The Samsung Galaxy S6 Edge+, by contrast, weighs 5.6 ounces. Overall, the Priv is a pleasure to hold, in part because of grippy, slightly rubberized coating on the woven glass back.

Like many modern smartphones, the high-resolution, 18-megapixel camera bulges out slightly from the back. It sits next to a pair of LED flashes (one white, one amber) and below that is the familiar BlackBerry logo. The top has a pinhole microphone hole, as well as the SIM and microSD card slots. The phone starts with 32GB of storage, but you can add up to a terabyte (when those cards become available) via the microSD slot. On the base, you’ll find your standard 3mm minijack and a micro USB charging and data port.

Aside from that hidden keyboard, the device has four ever-visible polished metal buttons: Power and sleep/lock on the left and volume up, down and a tiny mute button between them on the right side. I didn’t like these metal buttons much at first — they might be too subtle, at least to the touch — but eventually I got used to them.

The entire bottom edge, right below where you push to slide up the screen and reveal the keyboard is devoted to a pretty powerful speaker. I especially like that it’s pointed at you and not off to the left or right or down into your hand or a tabletop.

What is a Priv?

Before we get ahead of ourselves and call this device the second coming of BlackBerry, let’s talk a bit about BlackBerry’s intentions.

Priv, if you haven’t heard, is short for “Privilege or Privacy,” take your pick. It is not a fantastic name, but it’s intended to convey a much more serious approach to privacy control and security. BlackBerry told me that the device has security baked in during the manufacturing process; cryptographic keys are put in during production, and it has secure boot sequence as well as a hardened Linux kernel.

That all sounds great, though the only way most users might recognize all this added security is through a piece of software called DTEK, which is constantly measuring the overall security of the Priv and letting you know in real time what all the apps on the phone are doing. For example, you can see how often apps are accessing your location, contacts and the camera. If you don’t like what a certain app is doing, you can stop it and even uninstall the app right thought DTEK.

However, for a device so concerned with privacy and security, BlackBerry Priv is completely devoid of cutting-edge login options like a fingerprint sensor, facial recognition or iris scanning. On the bright side, the phone does include NFC, which supports Android Pay mobile payments, and contactless charging via Qi. Too bad the phone doesn’t ship with a contactless charging base.

The BlackBerry Priv is ostensibly a stock Android 5.0 (Lollipop) phone (Marshmallow should arrive within 12 months), but in reality, there are many BlackBerry touches throughout, including the trademark red splat that appears on icons when there’s an update, and the BlackBerry Hub communication center.

Priv even mixes in a little bit of ideas from other Android brands. Remember that curved screen I mentioned? You can drag in a “Productivity Tab” from the right edge of the Priv screen that includes Tasks, Calendar, Contacts and Mail. Since Android and Priv are already pretty generous with Notifications that pop up on my screen and that I can drag down from the top of edge of the phone’s screen, I rarely found the need for the Productivity Tab.

Still, in practice, the BlackBerry Priv is a fast and responsive phone that handles everything from gaming to web browsing and video playback with speed and ease. You can, though, feel the Priv at work; the right back edge gets almost uncomfortably hot during certain tasks.

Where Priv excels is in battery life. Remember how I told you that the Priv isn’t really much thicker and heavier than your average Android device and that it has a real keyboard as well as an aluminum sliding mechanism to reveal it? In spite of all that hardware, it’s rated at 22 hours and in my tests I easily got two solid days of mixed use on one charge. It one of the rare times I’ve looked at a mobile device and wondered where they put all the batteries.

The BlackBerry Priv boasts an optically stabilized 18-megapixel camera, which is certified by German optics manufacturer Schneider Kreuznach. Sadly, that German imprimatur doesn’t add up to stellar image quality. The photos I took looked good but couldn’t match the image quality I find when shooting with the lower-resolution iPhone 6S Plus iSight camera. Well-lit images looked good, but low light was a bit of a struggle for the Priv, as images could get pretty grainy.

The Priv’s front-facing camera is just 2MP, but the software takes it up a notch by adding a gimmicky panoramic selfie mode. To use it, you point it at your face and then follow the on-creen guidance to capture the image areas to the right and left of you. Samsung added something very similar a couple of years ago.

When it comes to ransomware, you don't always get … END_OF_DOCUMENT_TOKEN_TO_BE_REPLACED

Peyton Carr is a financial advisor to founders, … END_OF_DOCUMENT_TOKEN_TO_BE_REPLACED