You are here: Home / Entertainment / The First Ever Look At George Miller’s Scrapped Justice League Movie 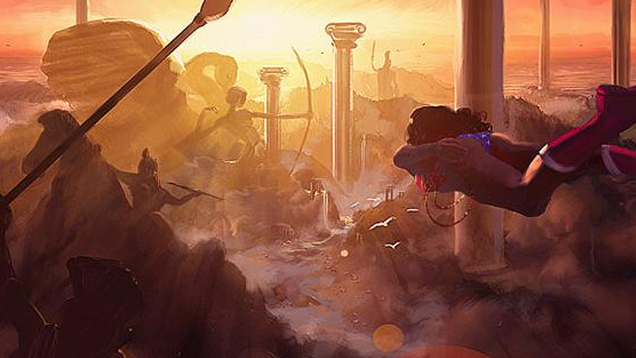 Before he was creating miracles in Mad Max: Fury Road, George Miller had plans to make Justice League: Mortal. Since the movie was scrapped in 2008, little has been seen outside of a leaked script — but that changed this weekend with a slew of concept art, storyboards and prosthetics hitting the web.

Tied into the publicity for a proposed new documentary being made about Justice League: Mortal, several pieces of concept art and storyboards were released, giving us our first ever glimpse at Miller’s vision for the DC Universe on the big screen by the Twitter account for the new documentary. Here’s several pieces of concept art featuring Wonder Woman (who would’ve been played by Fury Road’s Megan Gale) as well as a Weta Workshop character design for Aquaman (to be played by Heroes’ Santiago Cabrera) :

Aside from concept art, the account also tweeted an amazing sculpt of prosthetic work intended to turn Hugh Keays-Byrne (Immortan Joe in Fury Road) into the Martian Manhunter:

“I am Mars’ sole survivor. There is a reason for that.” – J’onn J’onzz – The Martian Manhunter. #JusticeLeagueMortal pic.twitter.com/myHMjdiukz
May 31, 2015

But it wasn’t just the news of the documentary that got people releasing details about the scrapped project. Steve Skroce, who drew storyboards for the movie, released a batch of boards on his Facebook account showing Wonder Woman and Batman duking it out (this was apparently going to be due to Superman being mind-controlled by Mortal’s villain, Maxwell Lord):

It’s amazing to suddenly see so much of this movie after all these years of nothing — and while the leaked script was not considered to be a particularly great one, the visual aesthetic Miller and his team were going for certainly looks to have been rather faithful to the comics. Still, cool to see what might have been for DC’s cinematic universe before we got Batman V. Superman.

When it comes to ransomware, you don't always get … END_OF_DOCUMENT_TOKEN_TO_BE_REPLACED

Peyton Carr is a financial advisor to founders, … END_OF_DOCUMENT_TOKEN_TO_BE_REPLACED