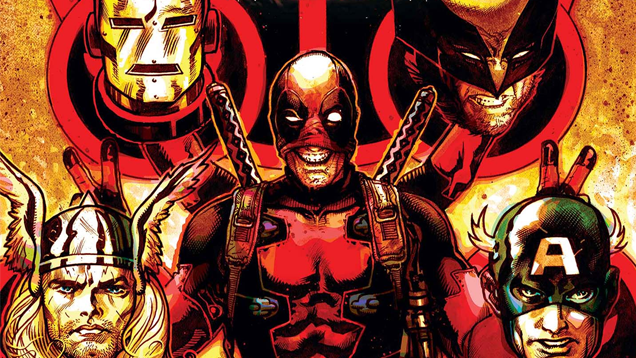 Deadpool as a character is known for his ability to tear a gaping hole through the fourth wall — so a whole series about him going back to the original 1984 Secret Wars event and mucking around isn’t out of character. But the series’ second issue, out today, also has one of the most bizarre deep cuts I’ve ever seen in a Marvel comic.

Minor spoilers ahead, of course for Deadpool’s Secret Secret Wars #2.

Now, some context going in: One of the biggest parts of the original Secret Wars wasn’t just the comic series. Toymaker Mattel released a whole line of action figures based on Secret Wars over the year the event lasted, and each figure came with a “Secret Shield,” a little lenticular disc kids could put pictures in that flashed between key moments from each Marvel character’s history (and, weirdly enough, their secret identities, which seems like a really bad thing to wave around on the front of a shield you’re carrying around):

Yup. That’s a whole stack of Secret Shields, which basically just became comics canon in this already metatextually bizarre story (somehow? You never quite know with Deadpool). I really hope something as silly as this remains a part of the Marvel Universe’s upcoming shakeup, but sadly I doubt it.
As ever with Deadpool, though, the meta-joke doesn’t stop there. Later on, the Merc with a Mouth finds his very own Secret Shield:

Recognise that picture? If you’ve been following along with Fox’s live action Deadpool movie, you should.
Oh, Deadpool. Never change.

When it comes to ransomware, you don't always get … END_OF_DOCUMENT_TOKEN_TO_BE_REPLACED

Peyton Carr is a financial advisor to founders, … END_OF_DOCUMENT_TOKEN_TO_BE_REPLACED