You are here: Home / Featured / This Is What The Aurorae Look Like On Mars 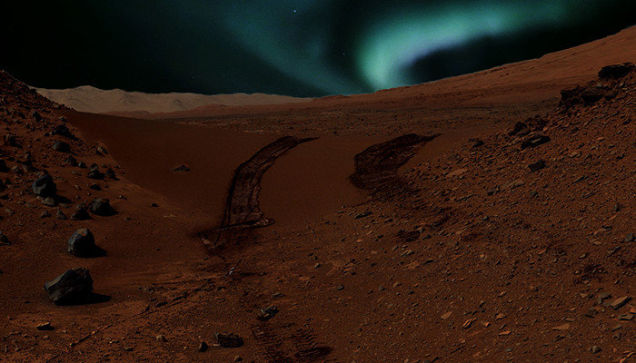 The aurorae here on Earth are a pretty impressive sight to behold, but, just like Earth, it turns out that Mars also has aurorae visible to the naked eye — with one pretty startling difference.

NASA, ESA, and several researchers joined together to figure out, first, if Mars had visible aurorae, and, second, just what those might look like. To answer their questions, they built a model to see if they could replicate an aurora. Using a planetary simulator set to mimic Martian conditions, researchers did create an other-worldly aurorae. But there was one surprise:

That brilliant blue-purple shade of light isn’t just an effect of laboratory conditions, it’s also what you would see if you were lucky enough to be standing on the surface of Mars’ south pole in the right conditions.

But while blue is the most common color you’d be likely to see, the green and red aurorae of our planet show up as well, with hints of both of those colors (which you can see a bit of in the lower right corner of the simulation) on the fringes of the Martain aurorae.

When it comes to ransomware, you don't always get … END_OF_DOCUMENT_TOKEN_TO_BE_REPLACED

Peyton Carr is a financial advisor to founders, … END_OF_DOCUMENT_TOKEN_TO_BE_REPLACED