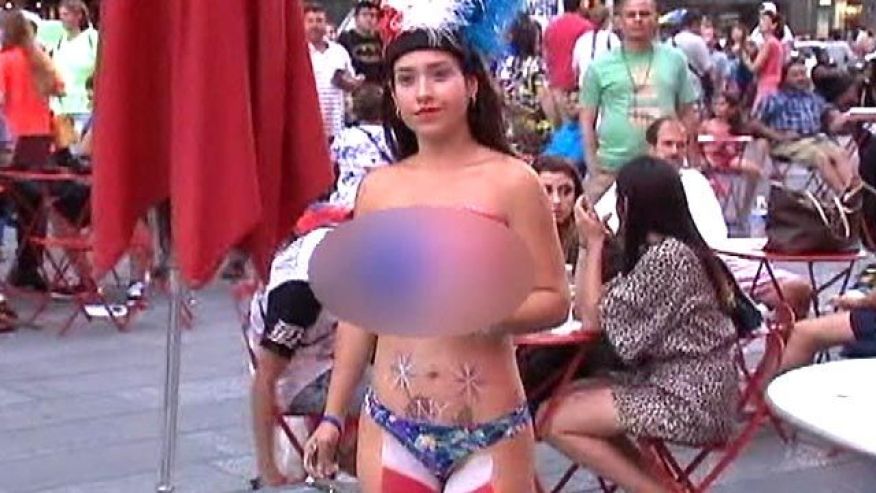 Destiny Romero, 20, was in the New York City tourist hub when an undercover cop posed for a photo with the topless performer and told her he “wanted to party.”

Her handler, Jason Perez, 22, offered to sell him cocaine and five “molly” pills for $200 and said Romero would hook him up.

The cop gave her a phone number and the address of a nearby hotel, and when Romero and Perez arrived, they allegedly sold the officers drugs for $200, sources said.

Romero also said she would perform oral sex on one of the cops for another $200, but she and Perez were instead handcuffed. Romero was slapped with prostitution and drug charges. Perez was hit with charges including promoting prostitution and criminal sale of a controlled substance.

Painted Ladies, also known as ‘desnudas,’ are the latest tourist attraction in Times Square. But while toplessness and panhandling are legal in New York, the city’s tabloids and some elected officials are calling loudly for action. Mayor Bill de Blasio claims pedestrian plazas are to blame for the desnuda movement and is considering getting rid of them.

He’s claimed accepting money for posing topless amounts to “a business transaction” that should allow the city some oversight.

But Saira Nicole, one of the women who accepts tips for her photos, doesn’t believe the practice should be an issue.

“People are having fun,” she said recently. “There’s no problem.”

Some critics have gone further, saying the argument against desnudas presents a double standard by unfairly targeting female topless performers while their male counterpart, The Naked Cowboy, continues without any harassment.

When it comes to ransomware, you don't always get … END_OF_DOCUMENT_TOKEN_TO_BE_REPLACED

Peyton Carr is a financial advisor to founders, … END_OF_DOCUMENT_TOKEN_TO_BE_REPLACED