You are here: Home / World / Toll Expected to Rise After Indonesian Military Plane Crashes Into City 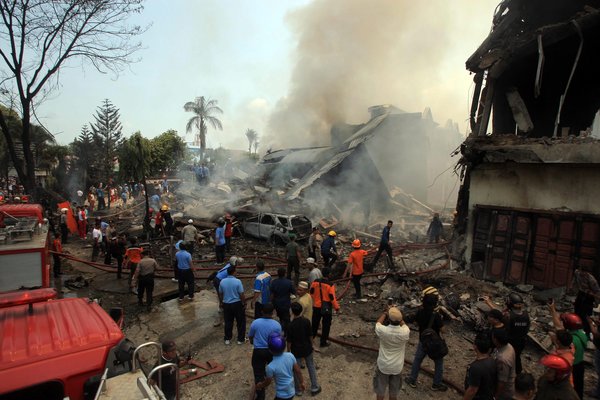 JAKARTA, Indonesia — An Indonesian military aircraft crashed into an urban neighborhood on Tuesday, killing at least five people, an armed forces spokesman said. The toll was expected to rise.

The military spokesman, Maj. Gen. Fuad Basya, told an Indonesian television station that 12 members of the air force were aboard the C-130 Hercules when it crashed in the city of Medan, on the island of Sumatra. It had been flying to the Natuna Islands in the South China Sea on a mission to drop off supplies for military personnel, he said.

“Five air force crew were found killed on the scene,” the general told Metro TV, adding that the military could not yet confirm whether there were also civilian casualties. “We are focusing on evacuation at the time being,” he said.

Sairi M. Saragih, a spokeswoman for Adam Malik General Hospital in Medan, said 20 bodies had been brought to the hospital, according to The Associated Press.

Images carried on local television and posted online showed onlookers gathered around burning buildings at the scene of the crash, with several ambulances and fire trucks trying to make their way through the crowd.

The C-130, an American-built four-engine turboprop, is a workhorse cargo and passenger aircraft for militaries around the world.

Indonesia has a troubled history of air safety, including several crashes in and around Medan, a city of two million. In 2005, a Boeing 737-200 operated by Mandala Airlines, a low-cost carrier, overran a runway during a failed takeoff there, killing 100 passengers and crew members and 49 people on the ground.

An Airbus A300 flown by Garuda Indonesia crashed on approach to Medan in 1997, killing 234 people. Miscommunication between the pilots and air traffic control and a thick haze caused by forest fires were blamed in that crash.

In December, Indonesia AirAsia Flight 8501 crashed in the Java Sea on a flight from the Indonesian city of Surabaya to Singapore, killing all 162 passengers and crew members aboard.

When it comes to ransomware, you don't always get … END_OF_DOCUMENT_TOKEN_TO_BE_REPLACED

Peyton Carr is a financial advisor to founders, … END_OF_DOCUMENT_TOKEN_TO_BE_REPLACED