You are here: Home / Lifestyle / Tornado Photo Bomb for Prom in Colorado 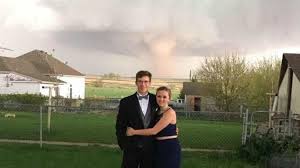 Enough with the promposals, guys. How about a prom with some real drama, some fireworks to make the night really memorable? One Colorado couple has you covered. While that large, half-mile-wide twister was tearing up power lines on the outskirts of Wray, Colorado, in town, a high school couple got the most dramatic backdrop for their prom photo they could hope for.

Charlie Bator and Ali Marintzer posed for the above photo as the tornado roared just three miles away, which seems really close because, really, look at that giant monster tornado.

But, as the storm was moving away from the couple, it was a safe distance and they got the snapshot of a lifetime.

And, because it’s 2016 and even funeral selfies are a thing, Marintzer made sure to get a quick selfie with the tornado in the background to share on Snapchat.

Marintzer told ABC Denver that the prom went on as planned after a 45-minute delay.

When it comes to ransomware, you don't always get … END_OF_DOCUMENT_TOKEN_TO_BE_REPLACED

Peyton Carr is a financial advisor to founders, … END_OF_DOCUMENT_TOKEN_TO_BE_REPLACED