You are here: Home / Lifestyle / Toss the Bouquet, Walk Down the Isle With a Bedazzled Selfie Stick 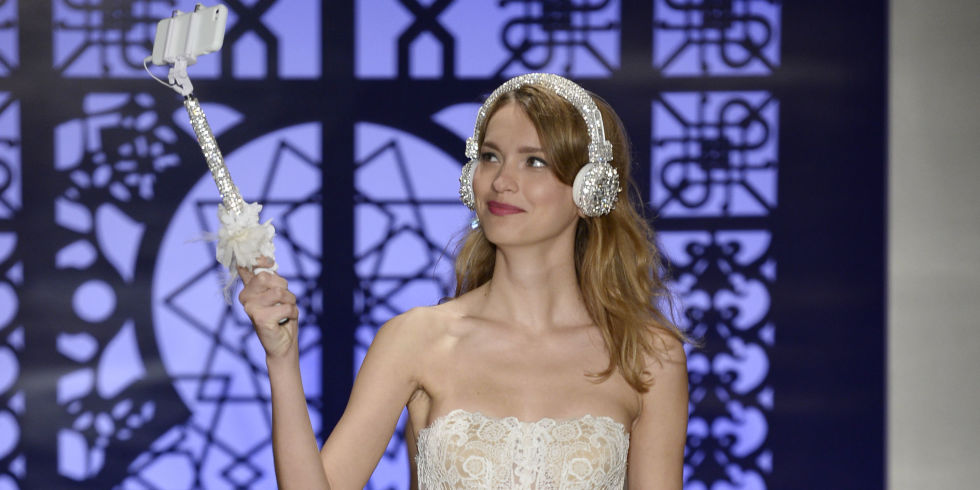 Who needs a photographer to capture the moment while you walk down the aisle? You can do it yourself. Bridal and evening wear designer Reem Acra swapped bouquets for bedazzled selfie sticks in her fall 2016 collection.

While there’s no word yet whether the sticks will be produced and sold by Acra, it’s a great starting point for wedding DIY inspiration either way. Acra is the latest in slew of designers to embrace the selfie. In September, Dolce & Gabbana models posed for selfies while strutting the catwalk; the photos were posted immediately to the brand’s Instagram account.

Misha Nonoo and Tom Ford also both ditched traditional runway shows, opting instead for more sharable platforms. Nonoo revealed her entire spring 2016 line on Instagram, while Ford enlisted Lady Gaga and a troupe of dancing models to show off his collection in a music video.

Many brands also kicked exclusivity to the curb this season, offering live streams of their shows for fans around the world to view.

Lauren Conrad and Serena Williams revealed their latest collections on Periscope, letting viewers purchase items immediately after the shows. Burberry embraced the Snapchat audience by previewing select pieces of its spring/summer 2016 collection a day before it hit the runway.

When it comes to ransomware, you don't always get … END_OF_DOCUMENT_TOKEN_TO_BE_REPLACED

Peyton Carr is a financial advisor to founders, … END_OF_DOCUMENT_TOKEN_TO_BE_REPLACED