You are here: Home / Entertainment / There Are Traitorous Events Afoot in Orphan Black 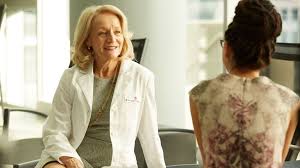 After years in hiding, Susan Duncan is coming out of the woodwork on Orphan Black, and she’s ready to take one clone back with her. In “Human Raw Material”, Cosima finally met her LEDA maker while undercover at the BrightBorn labs, and she now has a choice: Save herself by giving up Kendall Malone to find a cure for her illness, or keep her sestras’ trust and potentially get sicker.

“Share the original’s genome, and together we can make a cure for all of you,” Susan says, but based on the horrified reaction that Cosima had to the creepy deformed babies from BrightBorn’s “trial and error” gene therapy, she probably won’t be joining Susan’s team anytime soon.

I love Cosima sooooooo much!! She just gets to my heart. #cloneclub. @OrphanBlack @tatianamaslany

While Cosima makes her decision, the clones may have bigger fish to fry, like helping to keep Alison out of jail since the cops know about her Bubbles drug ring and possibly bringing Krystal into the Clone Club after Donnie accidentally revealed more to her than he meant to when they met at BrightBorn.

Let’s break down everyone’s biggest moments in this installment of Keeping Up With the Klones.

Sarah’s paranoia gets the best of her when she finds out that Felix found his “sister,” Adele, on Gene Connection, which Alison discovers is connected to BrightBorn. She has Scott do a DNA test on both of them, and to her surprise, Felix and Adele are really siblings and Neolution isn’t behind their meeting.

In more family drama, Kira tells Sarah that she can sense how the “sisters” feel sometimes, like how Cosima is sad, Helena is lonely, or Rachel is angry. They determine they aren’t dreams, but the jury’s still out on what exactly is possessing Kira.

Creepy detective Marty tells Art about the Hendrix family’s former drug ring at Bubbles, and they could be investigated. When Sarah confronts Alison, she retorts, “Former. We dabbled in pharmaceuticals.”

Alison also reveals that Helena is missing, but, thankfully, Helena sends Sarah a text that tells her she’s doing OK.

When Cosima poses as Donnie’s surrogate to find out what’s going on at BrightBorn, she meets Susan without knowing who she really is, swipes Susan’s badge to explore the labs, and unintentionally scrubs in on a delivery of a “carrier” baby. The child comes out severely deformed without a nose, and is allegedly just one of the test babies that BrightBorn is making using gene therapy.

After witnessing it first hand, Cosima confronts Susan about them doing “trial and error without consent.” Susan’s defense? That the carriers are well compensated.

Even though Cosima says she won’t give Kendall up to “make more lab rats,” Susan is hopeful they can work together.

“It’s up to them now. We are as close to the original as we have ever been,” Susan tells Castor clone Ira as they enter a pool together. “To a cure?” he asks. “Yes, my love,” Susan replies before they start making out.

Krystal has been working with a self-defense trainer to learn how to kick ass, and she’s also been trying to discover how DYAD, her dead ex Hector and the Castor twins who kidnapped her are all connected.

When Donnie is at BrightBorn with Cosima, he has to distract Krystal and pretends to be a masseuse to question her. When he says he thinks BrightBorn is creepy, she openly admits she’s on a “professional investigation” to figure out DYAD’s human experiments, stem cell research, and cosmetic procedures like giving a woman teeth for eyelids.

When she reveals a “French blond doctor” saved her, Donnie asks her if she means Delphine. “How do you know that name?” she screams, and even though he says he’s there to help, she kicks him and runs.

I can’t wait for Donnie to tell Alison that he gave Krystal a massage. #OrphanBlack

Later, she’s hauled out of BrightBorn by security and screams when she sees Ira.

Now that she knows there are more Castor clones and had that interaction with Donnie, it seems like the right time to bring Krystal into the fold. If Cosima ends up giving the rest of the sestras up to save herself, there’s a chance Krystal could even replace her in the Clone Club. But hopefully it doesn’t come to that.

When it comes to ransomware, you don't always get … END_OF_DOCUMENT_TOKEN_TO_BE_REPLACED

Peyton Carr is a financial advisor to founders, … END_OF_DOCUMENT_TOKEN_TO_BE_REPLACED