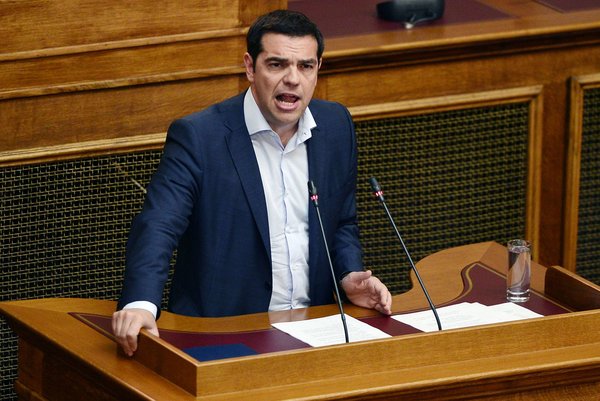 BRUSSELS — Greece’s prime minister, Alexis Tsipras, on Tuesday blasted his country’s creditors for austerity measures that he said were humiliating and strangling his people as pressure mounted on Athens to present reforms in exchange for bailout funding.

With critical deadlines pressing — the Greek bailout program expires in two weeks, when a huge payment on debt is due — European Union policy makers were discussing the possibility of an emergency summit meeting to determine a solution if eurozone finance ministers fail to broker a deal at their meeting on Thursday.

The standoff with Greece could have severe repercussions for European integration if Greece becomes the first country forced out of the 19-member currency bloc.

European stock markets and the euro were little changed on the day, and only in Athens did things appear particularly bleak, as stocks fell nearly 5 percent and bond yields stood at levels suggesting investors believe default on Greece’s bailout loans was a distinct possibility.

Michael Heise, chief economist for Allianz, the German insurance giant, said in an interview that he believed the eurozone’s other member states would “take sensible action” to ensure stability, and that the European Central Bank “stands ready to intervene if necessary” to calm markets.

Still, he noted, “no one really knows how this sort of thing would play out.”

The latest round of months of talks between Athens and its creditors broke down last weekend over the steps that Greece must take to reform its pension and tax systems in exchange for desperately needed financing.

Since winning a four-month extension of the country’s bailout program in February, Mr. Tsipras has sought to elevate the talks to the highest political level in order to minimize opposition from the creditors — the eurozone member states, the European Central Bank and the International Monetary Fund. Along with the European Commission, the central bank and the fund are also keeping track of whether Greece is carrying out reforms and meeting budget commitments.

Preben Aamann, a spokesman for the European Council, the body that organizes leaders’ summit meetings, said on Tuesday that no decision would be made on whether to hold a meeting of euro-area leaders until later this week.

The “next and hopefully decisive step is the Eurogroup,” Mr. Aamann said, referring to the group of finance ministers who are meeting Thursday in Luxembourg.

In an address to lawmakers of his leftist Syriza party, Mr. Tsipras said he would keep working with creditors for a deal. But he combined that appeal with a renewed stridency.

“We will keep working for a solution” but any agreement should “redistribute the burden” and not hurt salaried workers and pensioners who have already suffered in the five-year crisis, he said in a speech broadcast live on Greek television.

“The creditors want to humiliate the Greek people” and “to send the message that a popular mandate cannot change anything,” he said.

Mr. Tsipras, whose left-wing government was elected in January on a platform of putting the interests of Greece’s electorate before those of its creditors, challenged European leaders to move more rapidly toward recommendations by the International Monetary Fund to ease Greece’s huge debt burden.

“How can they accept I.M.F. à la carte?” Mr. Tsipras asked. “They accept its measures but not its call for debt restructuring.”

But Mr. Tsipras also accused the fund of “criminal” responsibility for errors in Greece’s economic reform program that deepened the recession. As for the European Central Bank, another major creditor, it was “continuing with a policy of financial asphyxiation” of Greece, Mr. Tsipras said.

The European Central Bank was expected to decide Wednesday whether to extend further emergency funding to Greece’s beleaguered banks.

Mr. Tsipras also hinted at a broader impact, beyond “small Greece” in the event of a default or his country’s departure from the single currency. “The time has come for Europe to seriously discuss not the fate of Greece but the future of the eurozone,” he said.

But euro-area leaders are likely to resist that appeal for direct intervention as long as possible, to avoid capitulating to Mr. Tsipras’s strategy.

And in what amounted to a thinly veiled warning to Mr. Tsipras to avoid counting on a gathering of leaders to deliver Greece a better deal than finance ministers, Mr. Aamann of the European Council said that there “should be no illusions that an agreement becomes easier” or “more advantageous over time” with the leaders’ intervention.

The acute frustration among European Union leaders with the government in Athens was on display Tuesday evening in Brussels where Jean-Claude Juncker, the president of the European Commission, told a news conference some of his proposals for Greece had been misrepresented.

Mr. Juncker said he proposed a plan to Mr. Tsipras to support investment there until the end of the decade. But Mr. Juncker complained that the government in Athens failed to tell the Greek people “exactly what the commission, being one of the three institutions in charge of all this, are really proposing.”

Mr. Juncker said he had had no contact with the Greek government since Sunday night, when negotiations in Brussels between senior Greek officials and representatives of creditors ended acrimoniously.

Mr. Juncker was addressing a joint news conference with Jens Stoltenberg, the secretary general of NATO, who said Greece continued to meet the Atlantic alliance’s guidelines for member states to spend 2 percent of gross domestic product on defense. Mr. Stoltenberg declined to comment on a suggestion by Mr. Juncker for Greece to make a “modest cut” in military spending.

“Greece has been for many, many years a highly valued and staunch ally,” Mr. Stoltenberg said. Finding a solution for Greece would be “important for the European Union, for Greece, and all of us,” he said.

James Kanter reported from Brussels, and Niki Kitsantonis from Athens.

When it comes to ransomware, you don't always get … END_OF_DOCUMENT_TOKEN_TO_BE_REPLACED

Peyton Carr is a financial advisor to founders, … END_OF_DOCUMENT_TOKEN_TO_BE_REPLACED