You are here: Home / Technology / Twitter’s timeline experiment: Is it done yet? 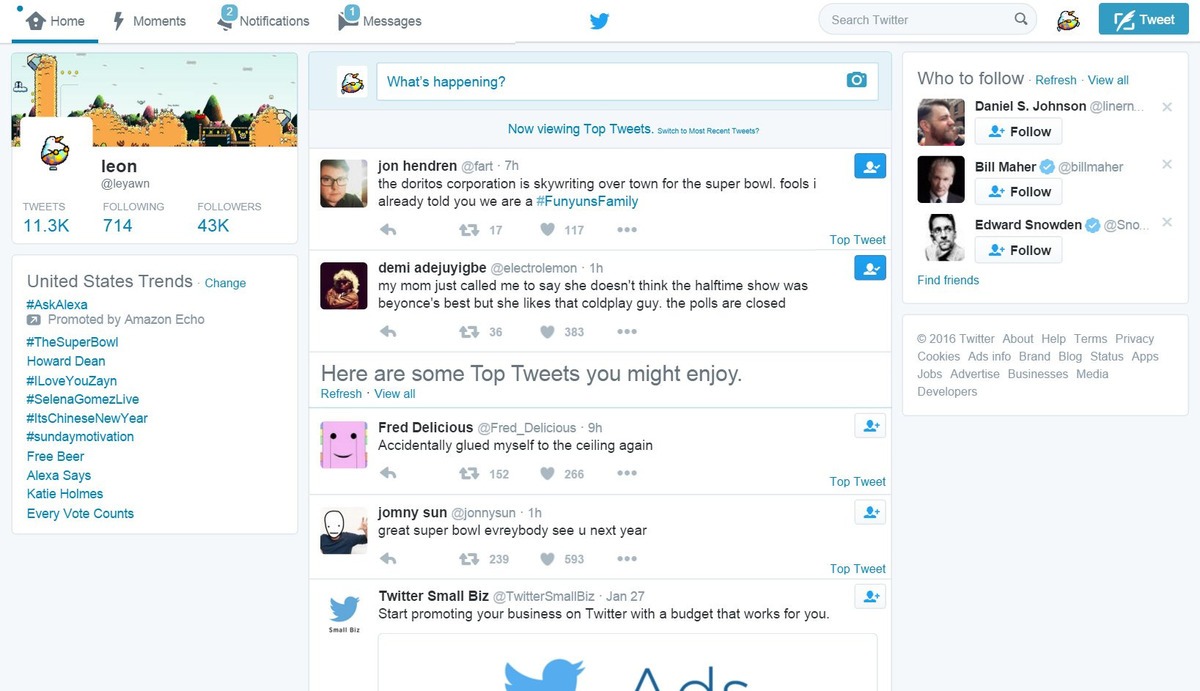 We may never know exactly what Twitter planned to do with its timelines before #RIPTwitter became the most popular hashtag on the beleaguered service, but we do know this: The much talked about experiment is done — at least for two users.

Bonny, who follows only 476 accounts on Twitter — many of them relating to space — told me over Twitter that he has no idea why he stopped seeing Twitter’s timeline test. Nearly a month ago, he noticed the new, algorithm-based timeline on both iOS and his Windows 10 PC. At the time, he didn’t tweet about it (mostly, Bonny retweets).

They show tweets in several “blocks.” For example, when I scroll through my timeline the tweets come to a point close to now (like 1 h), but then older tweets start appearing on top of those. I think you saw my screenshots on The Verge where there’s a jump from newer to older tweets, this shows this behavior quite well. After I’ve been offline for a few hours there would be 4-5 of these jumps in my timeline.

Bonny is far from alone as multiple Twitter users have reported algorithmically-altered timelines:

@AdamBongo my timeline is now an algorithmic system thanks to the new twitter update. so, no, you are wrong. good day sir.

here’s the new algorithmic timeline. i’ve had it for a few weeks. you can opt in to most recent each time you log in pic.twitter.com/lJw7uQuE5n

Leyawn, whose full name is Leon Chang, told me over Twitter that he, too, first noticed the timeline change in mid-January. And, like Bonny’s, it mysteriously disappeared a few days ago. The 28-year-old Brooklynite has no idea why he was selected for the test, though he wondered if it’s because he’s “some sort of power user.” Chang has 43,000 followers on the service.

Twitter CEO Jack Dorsey has intimated that timeline adjustments might be related to the out-in-the-wild “While You Were Away” block that often appears at the tops of Twitter users’ timeline.

Look at “while you were away” at the top of your TL. Tweets you missed from people you follow. Pull to refresh to go back to real-time.

Bonny insists, though, that the connection isn’t quite clear.

Clearly, Bonny is describing a Timeline that’s driven by something more than reverse chronology, a change he mostly didn’t like because it had a habit of scattering Twitter conversations all over the timeline. What it was using to define this order is unclear. It may have been popularity based on retweets and favorites (hearts), or it may have been something else.

Chang, however, noted that his timeline appeared to be heavily influenced by likes and retweets.

@leyawn cool thing about Top Tweets: i almost never see tweets now from people who don’t get a lot of rts or likes

Former Twitter Group Product Manager Paul Rosania went on a tweetstorm on Saturday, reminding users that even a reverse chronological tweet order is still driven by an algorithm.

Rosania, who now works at Slack, left Twitter months before this test launched. It seems unlikely he would know for certain what Twitter is or isn’t testing now. Still, he appears to feel strongly that Twitter users shouldn’t be so quick to revolt against possible changes, whatever they may be.

Big scary “algorithms” just bring more of the good stuff to the top. (If the freshest stuff is best, guess what’s going to be at the top!)

Aside from Dorsey’s blast of tweets, which really only confirmed that the timeline change is not coming this week and that they plan to make the service even more “Twitter-y,” there has been no official comment from Twitter, aside from an official spokesperson declining to comment.

A person familiar with the matter told me that Twitter has been experimenting with the timeline almost constantly, though that person had no insight into the company’s current activities.

One other important detail I learned from Bonny: He could not opt-out or control the experiment. If he wanted to see tweets in traditional, reverse chronological order, he had to either force close the app or reboot his phone. He never found a fix for Windows 10.

Chang’s experience diverged from Bonny’s in a number of significant ways. He only saw the change on Windows (not iOS), found that he could turn it on and off and seems to have encountered a timeline algorithm far more similar to Dorsey’s description. From Chang:

I’m not sure how the algorithm works. It seems to be similar to the “while you were away” feature that most people have. it shows some top tweets that I think a lot of people interacted with.

Still, Chang admits that it doesn’t say those words and the timeline is “definitely out of order.” Chang, who works in advertising told me the altered timeline was “OK. It’s kind of like Facebook. I don’t really need it though.”

Why did the experiment end for Bonny and Chang and did it have anything to do with the #RIPTwitter backlash? Who knows. Bonny seems relieved that it’s gone. “I appreciate that things got back to normal … I’m glad that I got the chronological order back, at least for a while,” he added.

When it comes to ransomware, you don't always get … END_OF_DOCUMENT_TOKEN_TO_BE_REPLACED

Peyton Carr is a financial advisor to founders, … END_OF_DOCUMENT_TOKEN_TO_BE_REPLACED