You are here: Home / World / Ukraine FM Asks Russia to Negotiate End to War in East 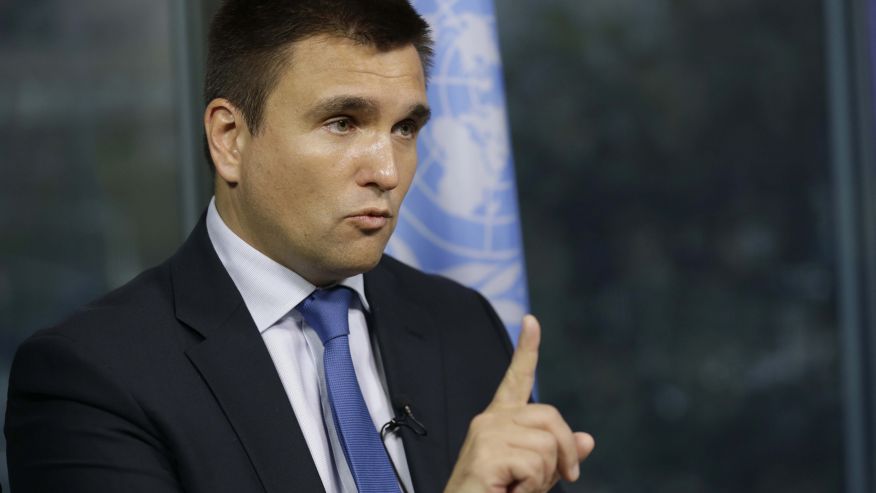 Ukraine’s foreign minister wants Russia to come to “real negotiations” about a cease-fire and stabilization in Ukraine’s war-torn east which will require fair elections that are intentionally monitored.

Pavlo Klimkin said in an interview with The Associated Press that Russian military and special forces are “in full command” in the eastern regions of Donetsk and Luhansk. He cited Ukraine’s capture a few days ago of a large Russian truck filled with weapons that was driven by a Russian special forces officer as one of many examples of Russia’s presence in the region. Russia has consistently scoffed at the claim and pro-Russia rebels dismissed the Ukrainian claim as a fabrication.

Kiev has had no control over parts of eastern Ukraine since pro-Russian rebels began fighting government forces in April 2014, a conflict that has since claimed more than 6,400 lives and displaced more than 1.5 million people. An armistice signed in the Belarus capital Minsk in February requires both sides to retreat heavy weapons from the front line, but international observers vetting that process regularly cite violations.

Klimkin said the rebels are persisting only because of Russian weaponry and military personnel crossing the border into eastern  areas, which the government doesn’t control. He said international monitors from the Organization for Security and Cooperation in Europe must have access to all areas in Donetsk and Luhansk. Now, he said, they don’t have access to up to 50 percent of the territory in the coal mining parts of the region.

The OSCE must be present in the east from the very beginning of preparations for any election and must remain to ensure that the voting is free and fair, he said.

Klimkin said Ukraine “can’t win militarily,” but it can be successful in the war because it has the support of an international community that views Russia as the agitator.

Russia has repeatedly denied Ukrainian and Western allegations that Russia has sent troops and weapons to back the separatists. It also blamed Ukraine for failing to abide by terms of February’s cease-fire signed in Minsk, in particular by failing to engage in talks with the rebels about the region’s future status and continuing economic blockade of the rebel-controlled territories.

Ukraine has reached a “point of no return” from the post-Soviet era after the revolution that began on Independence Square in Kiev in November 2013, Klimkin said. Ukraine is committed to undertake major reforms to “fully depart from this post-Soviet reality,” including tackling corruption and decentralizing the country, with the goal of joining the European Union and becoming part of “the European family,” he said.

“A democratic and European Ukraine is a nightmare for Russia,” he said, but Ukraine won’t be deterred.

Ukraine’s economy has been battered. The International Monetary Fund announced a $40 billion support package for Ukraine in February over the next four years, but only $15.5 billion of that amounts to new IMF funding, with smaller sums from other sources. More than a third of the total is meant to be unlocked by the renegotiations of debt.

Ukraine has delivered on all benchmarks for $1.7 billion of the IMF loan, Klimkin said, and it has been talking to private creditors about a number of loans taken by the previous government on conditions which are “mind-blowing in the sense of being extremely negative for Ukraine.”

“Now we need a comprehensive solution of that,” he said, “and we are not saying we’re not able to pay.”

Klimkin spoke to AP on Thursday, the day a preliminary hearing started in southern Russia for Ukrainian military pilot Nadezhda Savchenko who was captured by rebels and brought to Russia under murky circumstances and is charged in the deaths of two Russian journalists in eastern Ukraine last year. He reiterated she had nothing to do with the journalists’ deaths.

Asked about a possible exchange for two Russian officers arrested in Ukraine in May, Klimkin stressed that Savchenko is one of 10 Ukrainian political prisoners in Russia and the government is trying to win freedom for all of them. He said the case of the Russian officers, who were caught on Ukrainian territory with weapons, is very different and is still under investigation.

After the investigation and any court action are complete, he said, “there could be (a) decision about any sort of further procedure.”

When it comes to ransomware, you don't always get … END_OF_DOCUMENT_TOKEN_TO_BE_REPLACED

Peyton Carr is a financial advisor to founders, … END_OF_DOCUMENT_TOKEN_TO_BE_REPLACED