You are here: Home / Business / An underground layer of ice discovered on Mars, has more water than the Lake Superior 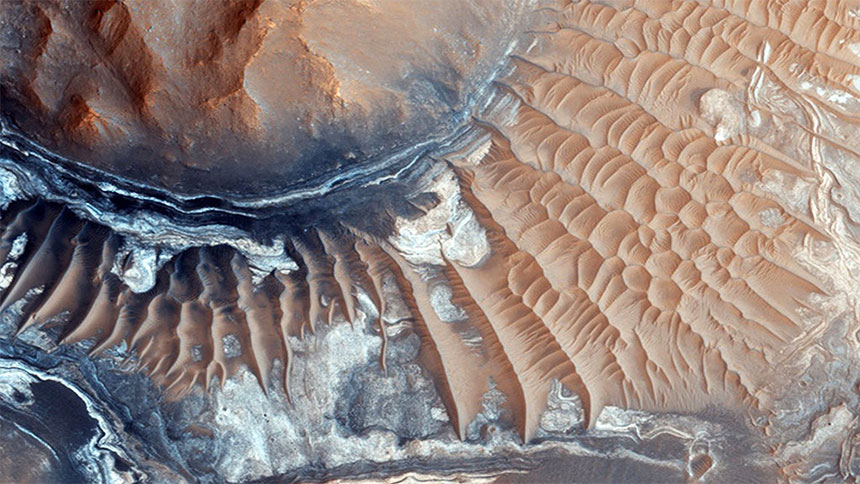 A huge deposit of underground ice on Mars contains as much water as Lake Superior, the largest of the Great Lakes of North America, indicates a new study, reports the Live Science. The ice layer which extends an area greater than New Mexico, is located in the northern hemisphere and is covered by a layer of soil of one to ten feet. For this reason,it represents a possible substantial resource for the future astronauts that will explore the Red Planet, said the researchers. These, led by Cassie Stuurman from the Geophysics Institute of Texas University, examined the observations in the Martian region Utopia Planitia of the so-called Shallow Radar (SHARAD), an instrument from the board of Mars Reconnaissance Orbiter (MRO) of NASA. The layer varies in thickness between 80 and 170 meters and is made in proportion of 50 to 85% of the iced water, the rest being smaller particles and rocks.

SHARAD is capable of making the distinction between layers of liquid water and ice and the data taken from this instrument shows that, in the present, all the water in the region of Utopia Planitia is in the form of ice. That is bad news for those who hope to find evidence of life on Mars. But, there is the possibility that a part of the water may have been in liquid state, in a period in which the poles of the Planet Mars had a different inclination. The deposit of ice was probably formed during a period of axial inclination when the snow accumulated in the average latitudes and not at the poles, as it happens in the present, said Stuurman. In these conditions, it is possible that the future studies on the layer of ice from this region to bring light on the way in which the Martian climate has evolved over time.

When it comes to ransomware, you don't always get … END_OF_DOCUMENT_TOKEN_TO_BE_REPLACED

Peyton Carr is a financial advisor to founders, … END_OF_DOCUMENT_TOKEN_TO_BE_REPLACED