You are here: Home / Entertainment / Once Upon a Time’s Season Finale Can’t Hyde from It’s Magical Ending 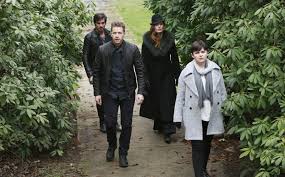 Storybrooke’s got a new boss. Tonight’s finale of Once Upon a Time introduced a whole new fairytale character, and half of him is a whole lot of bad news for the residents of Storybrooke.Jeckyll and Hyde have arrived, and while Dr. Jekyll is nice and harmless, his other half, Hyde, is all about ruling the world, or whatever typical thing villains want to do these days. He’s starting with Storybrooke, which is “just the sort of place he’s been looking for,” in exchange for helping Gold wake up Belle.

While Jekyll and Hyde started out the episode tied together in the same body, Dr. Jekyll created a serum to separate the good and the bad in a person, allowing he and Hyde to roam free of each other.

That serum also came in handy (or so she thought) for Regina, who spent the episode wrestling with the possibility that her former, evil self could come back out at any time. So, the plan was for Regina to be injected with the serum, and then as soon as the Evil Queen emerged, she would kill her.

That’s what Regina thought she did, but there was no way the Evil Queen was staying a pile of ashes. By the end of the finale, she was back and ready for revenge.

Most of tonight’s finale followed Rumple’s quest to wake Belle, with help from Hades’ crystal. He first cast a spell to tether the crystal’s magic to Storybrooke’s magic, meaning that one controlled the other. Henry decided that he was officially fed up with all the damage magic was doing to his family (and to Violet’s family), and vowed to destroy magic once and for all. He used his author’s pen to steal the crystal and ran off to New York to follow in his dad’s footsteps.Meanwhile, everyone back in Storybrooke thought that if magic were destroyed, they would be too, so they all went through a portal cast by Zelena using the sorcerer’s wand. Snow, Charming, Zelena, and Hook meant to stay behind, but the portal malfunctioned and they got sent to some strange steampunk blimp land, which is where they found Jeckyll and Hyde.

Regina and Emma, on the other hand, followed Henry to New York to try and stop him from destroying magic. In a library, Henry and Violet found new volumes of the storybook (including the story of Jeckyll and Hyde) and, obviously, the Holy Grail, which Henry thought might be the answer to his quest.After a bit of back and forth with Gold, Regina, and Emma, Henry did manage to destroy magic, just in time for everyone to learn about the rest of their family, stuck in the other realm. After some advice from a magical man named the Dragon, Henry climbed onto a statue to urge New Yorkers to believe in magic, wish on a coin in the fountain, and help them bring their family back. It was cheesy as hell, but it worked, and everyone made it back to the real world safe and sound, and Regina was even able to restore magic back to Storybrooke with help from the crystal.

Unfortunately, that’s exactly when Hyde showed up to announce that he now owns the place. Dun dun dun!

Once Upon a Time returns to ABC in the fall.

When it comes to ransomware, you don't always get … END_OF_DOCUMENT_TOKEN_TO_BE_REPLACED

Peyton Carr is a financial advisor to founders, … END_OF_DOCUMENT_TOKEN_TO_BE_REPLACED