You are here: Home / Entertainment / Victoria Beckham models pose themselves with food to show they are not anorexic 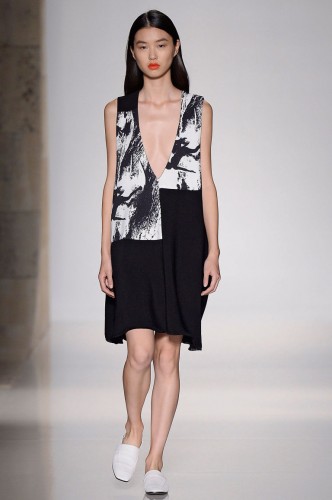 The models of Victoria Beckham, the girls described as ‘skin and bones’ after their presentations at the Fashion Week that took place in New York this week, published on Instagram some photos showing what they eat and especially the fact that they do eat, according to the online edition of the Daily Mail. After the ex-member of the pop band Spice Girls, who is 42 years now, presented her collection called SS17 as a part of the New York fashion show, she was accused of many people on the social media websites that she would promote the anorexia.

The models working for her, Mica Arganaraz, Ondria Hardinz, Camille Hurel, Iris Landstra, Jessie Bloemendaal and Julia Ratner, who have waists of 58-60 centimeters only, wanted to prove that the reality is another from what the people say. Jessie Bloemendaal, a Dutch girl who shares her time between London, Barcelona, Berlin and Amsterdam, posted a photo with spinach, bacon and chicken rolls and grilled vegetables, adding the #proud hashtag. The American Ondria Hardinz can be seen in photo while drinking from a beer bottle in a yoga position that reveals her elasticity.

Mica Arganaraz took a photo of her naked and with a cheese pizza plate in her face while Iris Landstra showed that she prefers the big portions of fish specialties. In 2010, David Beckham’s wife said that she is a supporter of the Beauty Is Health campaign created by the Fashion Designers Council of America and that she forbids the participation of the very skinny models at her presentations. Still, after she published on Instagram photos of the recent show, 12 million fans accused her for the chosen models. Victoria was also criticized for using a ‘skeletons parade’ for the presentation of her 2016 Spring/Summer collection at New York, in 2015.
skin and bones

When it comes to ransomware, you don't always get … END_OF_DOCUMENT_TOKEN_TO_BE_REPLACED

Peyton Carr is a financial advisor to founders, … END_OF_DOCUMENT_TOKEN_TO_BE_REPLACED