You are here: Home / World / Volvo Working on Kangaroo Detection 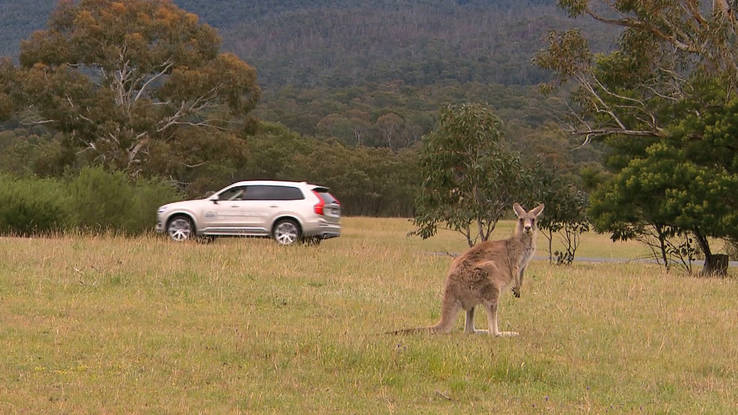 Different countries have problems with different animals on the roads. In the U.S. it’s mostly deer, Canada has a moose hazard (though some areas are sasquatch-heavy as well), the U.K. has cat-detector vans and drivers in Australia mostly have to watch out for kangaroos. That’s why trucks from Australia often have an entire jungle gym attached to their front bumpers — they call them “‘roo bars” down under.

Volvo is trying to tackle this costly and often tragic problem with kangaroo detection technology that uses cameras and radar to detect approaching animals, then applies the brakes automatically if an accident appears unavoidable. The tech is an extension of Volvo’s pedestrian and cyclist detection systems, but one geared towards operation at highway speeds. Or “Mad Max” speeds, rather.

“Whereas Volvo Cars’ Pedestrian Detection technology is geared towards city driving, our kangaroo detection research is focusing on highway speed situations,” said Martin Magnusson, Senior Safety Engineer at Volvo Cars. “Kangaroos are very unpredictable animals and difficult to avoid, but we are confident we can refine our technology to detect them and avoid collisions on the highway.”

As with deer, kangaroo/vehicle collisions are hard to manage due to the animals’ tendency to impact vehicles from the side, outside the driver’s field of view and often at full speed. Adding to the problem is the fact that kangaroos are long-legged, and the bulk of their heavy bodies is usually at windshield height in passenger cars, with collisions forcing their bodies onto to a passenger car’s hood and windshield. There are 20,000 kangaroo strikes in Australia annually with an insurance cost of AU $75 million, according to National Roads & Motorists’ Association (NRMA), with a tremendous toll in injuries for beast and man alike.

“In Sweden we have done research involving larger, slower moving animals like moose, reindeer and cows which are a serious threat on our roads,” said Magnusson. “Kangaroos are smaller than these animals and their behaviour is more erratic. This is why it’s important that we test and calibrate our technology on real kangaroos in their natural environment.”

When it comes to ransomware, you don't always get … END_OF_DOCUMENT_TOKEN_TO_BE_REPLACED

Peyton Carr is a financial advisor to founders, … END_OF_DOCUMENT_TOKEN_TO_BE_REPLACED