You are here: Home / Entertainment / What Miss Universe Is Saying About Donald Trump 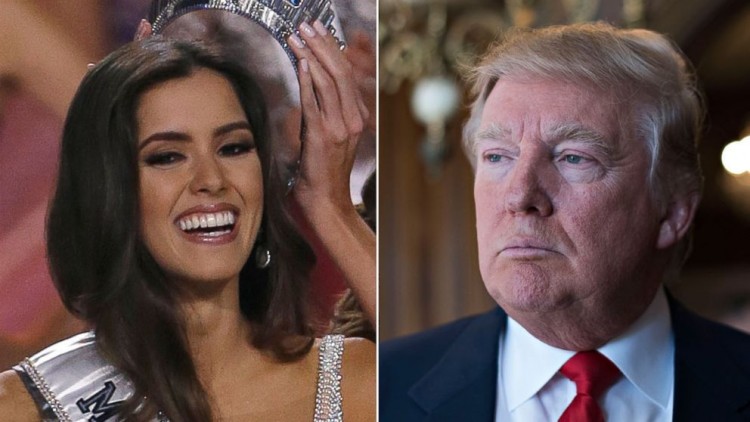 The reigning Miss Universe joined a chorus of voices denouncing controversial remarks by the pageant’s owner, Donald Trump. “I find Mr. Trump’s comments unjust and hurtful,” Paulina Vega wrote in an Instagram post. “As a Colombian and as Miss Universe, I want to show my support and validate the sentiments of the Latin community.”

However, despite outrage in Colombia over Trump’s views, Vega has said she won’t be giving up her crown, the Associated Press reported.

Trump angered many with comments in his presidential announcement speech last month about Mexican immigration to the United States.

This week, actress and activist America Ferrera, who is of Honduran descent, wrote in The Huffington Post that Trump’s remarks were “incredibly ignorant and racist,” but would drive Latinos to the polls.

Others speaking out have included Ricky Martin, Shakira and Eva Longoria.

In recent days, a number of businesses — including Univision, NBCUniversal and Macy’s — have suspended their contracts with Trump.

Vega suggested she would consider suspending her relationship with Miss Universe, but believed, “The Miss Universe Organization works independently from its owners. For the past 64 years, they have created partnerships with great charity groups and have helped thousands of communities. Their legacy of uniting countries from around the world has been inspiring to many. If the Miss Universe Organization shared any anti-Latin sentiments or any type of racial biases, I wouldn’t be in this position today.”

The Donald Trump campaign did not immediately respond to a request for comment this morning.

When it comes to ransomware, you don't always get … END_OF_DOCUMENT_TOKEN_TO_BE_REPLACED

Peyton Carr is a financial advisor to founders, … END_OF_DOCUMENT_TOKEN_TO_BE_REPLACED