You are here: Home / Entertainment / What Will Jon Do Back from the Dead in Game of Thrones? 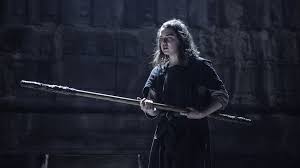 The Tower of Joy has arrived, but it still holds plenty of possibly world-defining secrets even after its debut. Only three episodes into Season 6, Game of Thrones teases viewers with a major book scene that could hold the key to the ever-popular R+L=J theory of Jon Snow’s lineage.

You’ll have to wait longer to see whether the show explores that popular and still unproven lineage of Jon Snow’s parentage, but “Oathbreaker” opens the door to it by showing the famed battle at the Tower of Joy. A small-yet-tense battle is depicted at the tower via another vision by Bran and the Three-Eyed Raven (which should be rebranded as Season 6’s Foreshadowing and Backstory Exposition Corner) of Ned Stark and his men’s fight against Arthur Dayne and his companion guards.

Ned and his fellow fighter Howland Reed are the only survivors, the former heading off into the tower to investigate after hearing a woman’s scream. The Raven (or rather, the writers) decides that is the time to leave the vision, preventing Bran and viewers the easy satisfaction of knowing what awaits Ned in the tower. It’s not a total shock the scene ends where it does — it’s tough to imagine the show debuting such monumental scenes one after the other. But the sequence’s timing feels like more than mere coincidence, particularly with The Raven’s cop-out reason for pulling Bran out of the vision.

If what Lyanna made Ned promise her in that tower does indeed give weight to the idea that Jon Snow is the son of Lyanna and Rhaegar Targaryen, introducing a portion of that scene shortly after Jon’s revival is perfect timing to tease what lies ahead. And if what happens inside the tower has nothing to do with the theory? Well, it must be of some great importance if The Raven introduces the moment to the young Stark. Bran’s biggest revelation here comes in understanding his father may not have told the full truth of the battle to him, implying he could be hiding much more about what occurred there, whether it concerns Jon or something else entirely.

If the Tower of Joy does relate to Jon, it’s only fair that the show put some distance between major moments. After all, the poor guy is still reckoning with having been brought back to life.

And Jon didn’t ask to be revived from… well, nowhere, according to him. Yet he has returned, Melisandre believing he must have some great purpose that Stannis Baratheon could not fulfill.

Jon is less sure of his purpose, however, he regains control of his reclaimed life in “Oathbreaker.” He personally handles the hanging of those who stabbed him, but rather than return as Lord Commander of Castle Black, he ends his watch. He hands over his coat to Dolorous Edd, giving him control of the castle without much care for what actually happens as Jon walks away.

Whether Jon knows what he wants to do with his second chance at life, he’s clearheaded enough to know what he doesn’t want — despite the wishes of those who revived him.

The secretes at the Tower of Joy may hold life-altering information for Jon’s future, but for now he goes out into the world as a newly not dead man, seeking understanding rather than simply fighting to fight.

The future is perhaps just as murky for another of the Stark children. Rickon Stark returns but as a hostage of House Umber, which has come to Winterfell begrudgingly seeking Ramsay Bolton’s help to defend against the Wildlings. And though Rickon is not the exact Stark Ramsay is hoping for, a captive Stark (and his direwolf’s head) is still a worthwhile prospect for the murdering, raping, sniveling leader of the north.

The only Stark to see their world more clearly is Arya because, well, she gets her eyesight back. After a training montage begging for a song or two from the Creed soundtrack, Arya proves herself a formidable fighter. Jaqen then offers her a drink of water that removes the cloudy white of her blind eyes, which should hopefully move her beyond the combat practice purgatory she’s been in since the season began.

Daenerys, however, looks to be entering a torment of her own, now having arrived at the Dosh Khaleen. The women there, including the widow of another former Great Khal, tell her that her future will be decided, and they are not pleased that she went out into the world rather than lived with them. She must be judged, and being allowed to live with these women would be the most merciful option.

Dany probably wouldn’t have had much more fun ruling Meereen, as Tyrion and the rest of the crew figure out how to deal with the Sons of Harpy. Varys plans to send some of his little birds out to begin conversations to do just that. Qyburn, however, has taken to turning Varys’ birds in King’s Landing (aka children) to aide Cersei and Jaime as the Lannisters look to gain as much knowledge of their standing in the world before proceeding with whatever plans they’re making.

They might want to enact those plans soon, as the High Sparrow seemingly toys with King Tommen’s beliefs. And so far none of the Sparrow’s scheming has been to anyone’s benefit but his own.

When it comes to ransomware, you don't always get … END_OF_DOCUMENT_TOKEN_TO_BE_REPLACED

Peyton Carr is a financial advisor to founders, … END_OF_DOCUMENT_TOKEN_TO_BE_REPLACED