You are here: Home / Uncategorized / You Won’t Believe What This 1,700 Year-Old Obituary Really Says 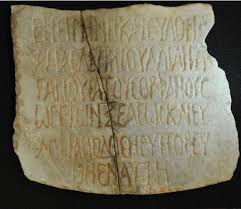 A 1,700 year-old obituary, which had been archived for over 27 years, has finally been translated ― and raises some interesting questions about concerns as well as previously held beliefs.

Lincoln H. Blumell, an associate professor who specializes in ancient scriptures at Utah’s Brigham Young University, translated the epitaph that had been sitting in the Rare Books Department at the University of Utah’s J Willard Marriott Library since it was donated in 1989. It was written in ancient Greek and was originally found in Egypt.

Blumell’s translation says it commemorates a Jewish woman named Helene who cared for and loved orphans. It also says she lived to be almost 60.

In peace and blessing Ama Helene, a Jew, who loves the orphans, [died]. For about 60 years her path was one of mercy and blessing; on it she prospered.

Blumell’s findings have been published in the Journal for the Study of Judaism in the Persian, Hellenistic and Roman Period. But the translation does raise some questions about commonly held beliefs. For example, Helene is identified as being Jewish, but the word “Ama” ― a title reserved almost exclusively for Christians ― is bestowed upon her. The epitaph also describes her age at death to be about 60 in a time where women typically lived to be just 25. Furthermore, she lived in an era when there were no social programs to help orphans and taking care of them was seen as a very noble pursuit. Serving the widows and orphans is a common call to action in the New Testament. The inscription also helps to identify the presence of a Jewish community in Egypt region during the period after the deadly Jewish revolt of A.D. 115–117 when the Jewish community was decimated. It was believed that this was written in the early A.D. 200s.

While there are many obituaries older than this one, Blumell said in a BYU press release that this one is still incredibly unique.

“I’ve looked at hundreds of ancient Jewish epitaphs and there is nothing quite like this. This is a beautiful remembrance and tribute to this woman,” Blumell said. He said the writings “pulled at his heart” and he wishes he could find out more about the woman.

“We have all these questions that we can’t answer,” he said.

Blumell told CNN that his discovery was quite accidental. “I knew the University of Utah had a collection of ancient artifacts so I made my way over to see if they had anything interesting and I remember when they pulled it out I was in shock because I immediately recognized it was Greek,” Blumell told CNN.

He said it took him a couple of hours to have a rough translation, which he later tweaked before publishing the findings. The Marriott Library was gifted the epitaph by Aziz S. Atiya in 1989. It was identified as a “Coptic inscription, dating from the dawn of the use of the Greek alphabet, not earlier than the second century, but not later than the third.”

“That is how we described it for the next 27 years, and we were wrong,” said Luise Poulton, managing curator of rare books at the library.

When it comes to ransomware, you don't always get … END_OF_DOCUMENT_TOKEN_TO_BE_REPLACED

Peyton Carr is a financial advisor to founders, … END_OF_DOCUMENT_TOKEN_TO_BE_REPLACED