You are here: Home / Entertainment / Citzens March in Argentina for the right’s of Women to tan in the Nude 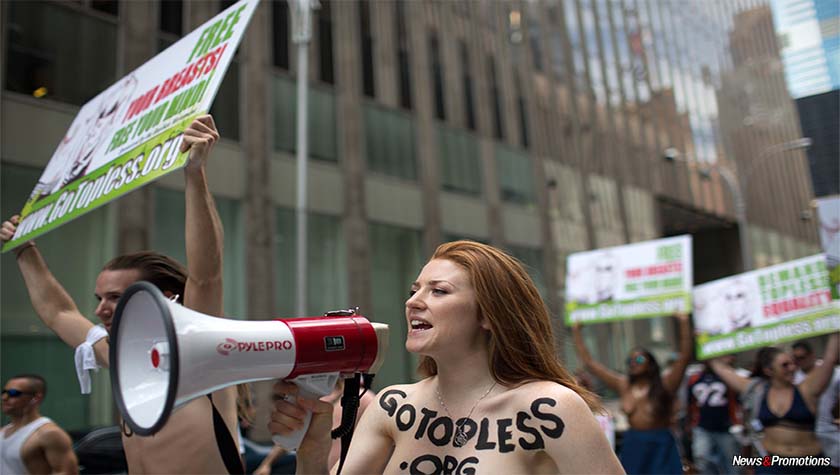 Tens of half naked women, supported by hundreds of dressed protesters, marched in Buenos Aires for the right to stay topless on the beach after the police recently asked some women without bras to leave a beach in the vicinity, reports the DPA. Similar protests took place in the last few weeks on the territory of Argentina after the incident from January, but is still unclear if the laws in Argentina allow women to be topless in public. The police made reference to an article of the penal code which prohibits the obscene exposure in public to justify the request addressed to those women to leave the beach, even if at least one judge established after the occurrence of the incident that the topless tanning in public is not a crime. The women, who brought into discussion the fact that they must have the right to tan on the beach just like the men, chanted along and have painted slogans on their bodies.

The protesters indicated that the incident on the beach shows the social inequality between men and women in Argentina. At the end of January, in the middle of the summer in the Southern hemisphere, a crowded beach at 500 km distance from Buenos Aires was the scene of an unusual event: almost 50 policemen surrounded three women who were tanning without wearing bras. They had been denounced by the other people who were sitting on this beach and the three were liable to fine. After several discussions, in the midst of a multitude of people, which, either were defending the women, or were shouting at them to leave, the women preferred to leave the beach.

The moment was filmed, and has been circulating all around the social networks. The incident triggered a massive controversy in this South American country.

When it comes to ransomware, you don't always get … END_OF_DOCUMENT_TOKEN_TO_BE_REPLACED

Peyton Carr is a financial advisor to founders, … END_OF_DOCUMENT_TOKEN_TO_BE_REPLACED