You are here: Home / Top News / Emirates Air Crash in Dubai: 300 Lucky Souls on Board 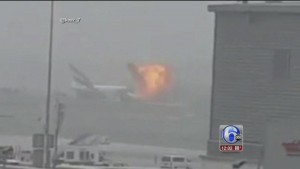 All 300 people on board were able to escape from the burning aircraft, but a firefighter was killed tackling the blaze.

The Boeing 777 appeared to have landed on its belly, and images showed thick black smoke rising into the sky.

The aircraft was flying to Dubai from the southern Indian state of Kerala.

Flights to and from the airport were suspended for several hours but have now resumed.

The Emirates chairman told a press conference that evacuation procedures were executed professionally and the cabin crew were the last to leave the plane. 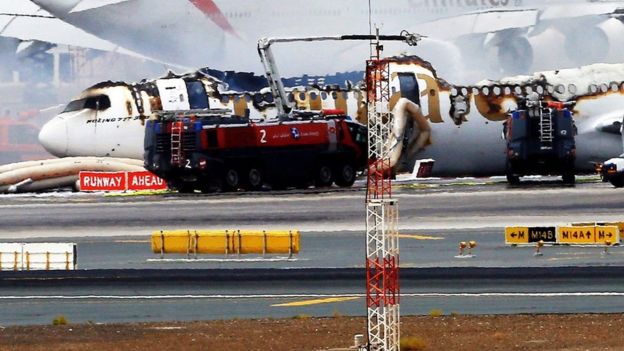 A passenger on board the plane told Reuters news agency that the experience was terrifying.

“As we were landing there was smoke coming out in the cabin,” said Sharon Maryam Sharji.

“People were screaming and we had a very hard landing. We left by going down the emergency slides and as we were leaving on the runway, we could see the whole plane catch fire.”

Emirates said there were 282 passengers and 18 crew on board from 20 nationalities, most of them Indian, with 24 Britons and 11 people from the United Arab Emirates.

The captain and the first officer have over 7,000 hours of flying experience each, the airline said. 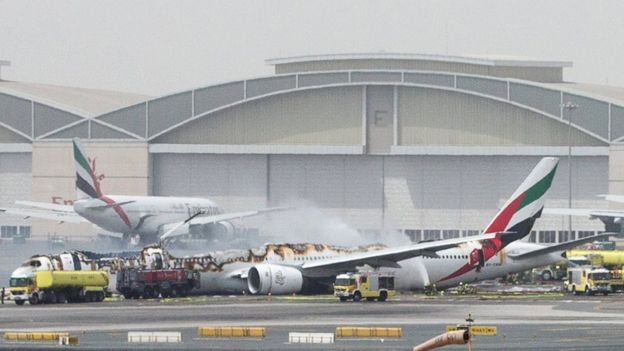 As is usual following a big accident, there are lots of unconfirmed reports out there speculating about what happened.

The aircraft is sitting on the ground without its landing gear, but it is not clear why the wheels are not down.

Some reports suggest the crew were making a normal, rather than an emergency approach, when air traffic controllers told them to abandon the landing and start climbing again, for unknown reasons.

The answers should come out in the next few days.

Whatever the cause, it is a testament to the crew that they got everyone off the plane. 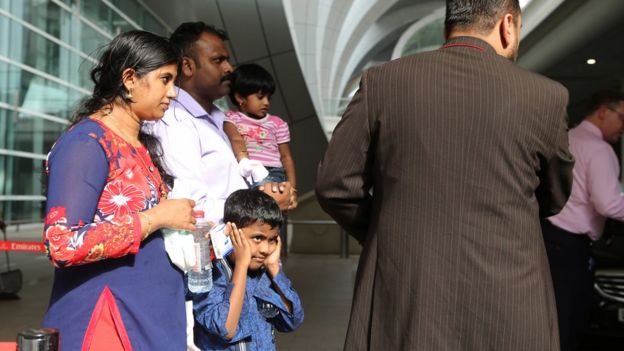 Flight EK521, direct from Thiruvananthapuram to Dubai, is popular with hundreds of thousands of Kerala residents who work in the Gulf countries.

Emirates is the Middle East’s biggest airline, and has an excellent safety record.

It ranked seventh in a survey of the world’s safest airlines by AirlineRatings.com, an independent plane safety website.

Dubai International Airport is a major transport hub, one of the world’s busiest for international passengers, operating with only two runways.

If you are planning on travelling soon either domestic or internationally and would like to find the best airlines, hotels, and package deals.

Check out Paradise Travel which is a website ran by travel enthusiasts where you can find the best deals on the web.

When it comes to ransomware, you don't always get … END_OF_DOCUMENT_TOKEN_TO_BE_REPLACED

Peyton Carr is a financial advisor to founders, … END_OF_DOCUMENT_TOKEN_TO_BE_REPLACED