You are here: Home / Education / The office in which Adolf Hitler died, rebuilt in an ex-Nazi bunker 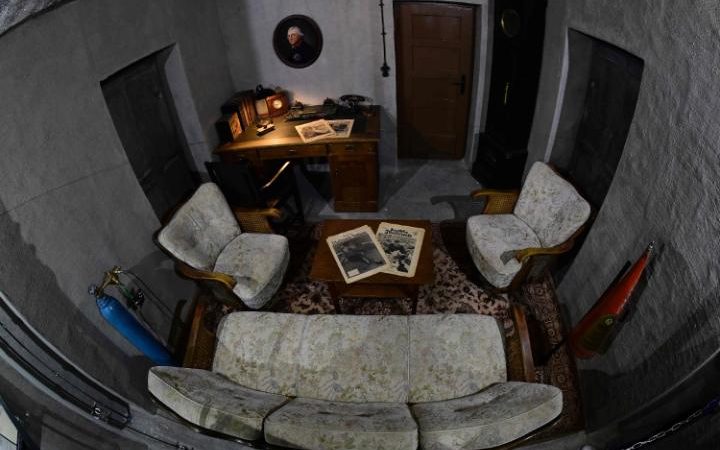 In a former bunker of five floors, built in the era of the National-Socialism in Berlin, was created a replica of the office in which Adolf Hitler committed suicide swallowing cyanide and which provides an extensive documentation about the history of the Nazism, according to EFE. Under the title ‘Dokumentation Führerbunker’, an exhibition that shows events from the Second World War in Germany, the building of the Nazi leader and the end of the Third Reich was presented on Thursday to the press.The exhibition presents the authentic photos from that period and is completed with images from the German film ‘Untergang’ (‘The Fall’), which shows the last days of Hitler in the bunker. In addition to the reconstitution of the original office of Hitler, where you can see original newspapers from that era, a tube of oxygen and a portrait of King Wilhelm II, a layout representing the original structure of the true Hitler’s bunker can also be seen.

The bunker remains a mystery, because it was buried under wreckage after the Russians demolished the buildings in this area in the Second World War. The bunker, built between 1943 and 1944, near the iconic Brandenburg Gate, had a surface of 2,700 square meters and almost 30 rooms. Its position it was a strategic one being surrounded by the most of the government buildings of that time, under which there were many underpasses connected between them as well as other smaller bunkers. It is difficult to know the exact location of the bunker, since is based only on a signal in a complex of buildings that indicates the place, with approximation. The death of Adolf Hitler also remains a mystery and a controversial subject. The supposition that the Nazi leader run away instead of killing himself is one of the controversial ideas.

When it comes to ransomware, you don't always get … END_OF_DOCUMENT_TOKEN_TO_BE_REPLACED

Peyton Carr is a financial advisor to founders, … END_OF_DOCUMENT_TOKEN_TO_BE_REPLACED