You are here: Home / Featured / Photo Of A Black Lives Matter Protester Is Being Hailed As Iconic 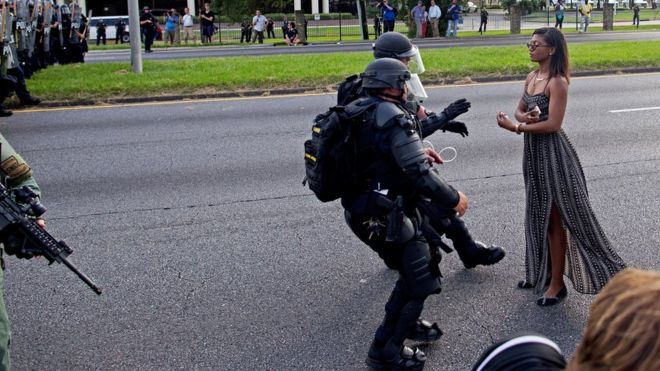 It was a hot July day when Evans who is 35 years old, was arrested for protesting #BlackLivesMatter peacefully at a rally in Baton Rouge Louisiana over the weekend. Evans who is shown in the picture below wasn’t causing a scene or doing anything to jeopardize the safety of the public or officers who were there controlling the crowds. However, she was arrested and then released on Sunday July 10th, 2016.

The only thing she did was refuse to move where she stood in the street. She was one of more than 100 protesters who were arrested on Saturday. There has been an increase in arrests made since the shooting of the officers in the news recently. Most protesters are out trying to share a story, or protect the rights of their nation. However, when things get out of hand the law enforcement takes things into their own hands and can quickly just start arresting people for no reason. When the police show up in full riot gear to start arresting the public for peacefully protesting their rights there’s just something wrong with this picture. As some demonstrators moved and others yelled at officers, one woman (Evans) stood silently on the roadway and resolutely refused to budge. She was arrested for this!

Leisha Evans commented on her Facebook wall after the incident with the following comment: “I appreciate the well wishes and love, but this is the work of God,” Evans wrote on Facebook. “I am a vessel! Glory to the most high! I’m glad I’m alive and safe. And that there were no casualties that I have witnessed first hand.”

When it comes to ransomware, you don't always get … END_OF_DOCUMENT_TOKEN_TO_BE_REPLACED

Peyton Carr is a financial advisor to founders, … END_OF_DOCUMENT_TOKEN_TO_BE_REPLACED