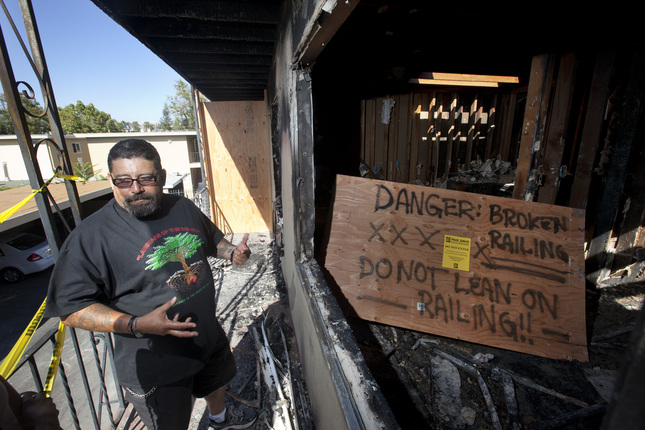 Joey Martinez glances inside the charred, second-story one bedroom apartment on North Fifth Street, eyes the chairs, a bed and counters all burned to a crisp, and shakes his head.

Piles of ash and the smell of chemicals waft in a light breeze, and a piece of wrought iron holding up the balcony outside trembles as residents walk nearby.

“Bottom line, it could have been prevented,” Martinez said quietly.

The Saturday night fire at the complex, located at 336 North Fifth Street, left six San Jose residents homeless. The man accused of starting the fire, 32-year-old Craig Morales, was arrested by San Jose police after officers used a Taser on him at the scene, residents said.

He faces charges of arson, resisting arrest and being under the influence of a controlled substance, according to San Jose police.

But that was not Morales’ first interaction with police that night.

Shantel Montoya, who is the on-site manager at the complex, said she and her husband were told about a disturbance at Morales’ apartment sometime around 10 p.m. Despite efforts to calm Morales, residents eventually called 911. Police swarmed the complex, evacuated units adjacent to Morales’ apartment, and even fired rubber bullets at him as he chucked butcher and steak knives and furniture below.

Residents cowered in Montoya’s apartment, waiting to be told it was OK to go home, but residents said no officer ever came to tell them the coast was clear. It was only when Joey Martinez looked out a window that he noticed officers were leaving the complex.

When asked why officers were leaving, Montoya was told that Morales “had not committed any crime” and that officers instead decided to let Morales stay inside his father’s apartment.

A short time later, Martinez said he looked out his apartment window to check and see if things were back to normal and saw smoke and flames billowing from Morales’ apartment.

Martinez’s wife, Julie Martinez, said her husband yelled “Fire!” and told her to run out of the complex. As they scrambled to get to safety, residents said they saw Morales walk out of the flames in nothing but his underwear. He headed toward a back set of stairs, where officers use a Taser on him.

“I’ve never been more scared in my life,” Julie Martinez said. “And now we live in this mess.”

But the fire is not what has residents upset. They say they wonder if the fire could have been prevented if San Jose police had arrested Morales earlier that night.

“It is very unfortunate that the residents were displaced by what the suspect did,” said San Jose Sgt. Enrique Garcia. “We are concerned about what transpired. We will be conducting an administrative internal investigation to see what the officers did, why they did it and if there was something our officers could have done differently.”

As residents continue to cope with their massive loss, they have chosen to stand by Morales and his family, saying they know Morales needs help. Montoya and others are attending every court hearing they can to show support.

“This was a really nice complex,” Joey Martinez said. “Nobody argued. Everything was OK. It’s sad this happened.

“We have a lot of empathy here,” he added. “We are doing as much as we can and have a lot of support with one another. We are trying to help those affected at least get halfway back up on their feet.”

When it comes to ransomware, you don't always get … END_OF_DOCUMENT_TOKEN_TO_BE_REPLACED

Peyton Carr is a financial advisor to founders, … END_OF_DOCUMENT_TOKEN_TO_BE_REPLACED