You are here: Home / Weather / The Invisible Victims Of California’s Drought 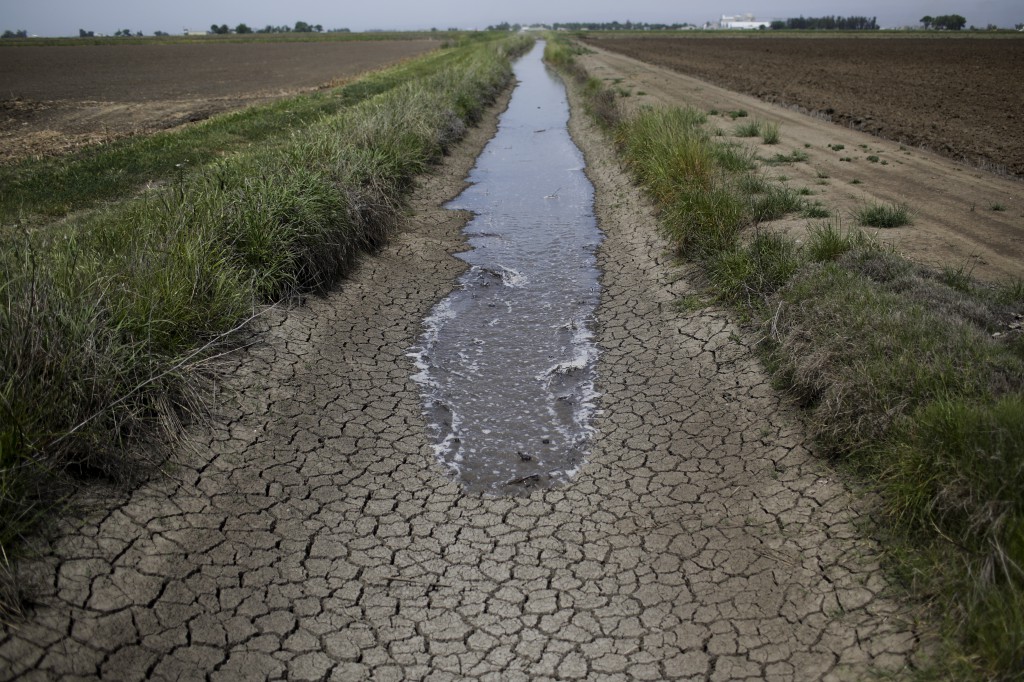 Irrigation water in California. A 17 year-old pregnant farmworker died in a vineyard of heat exhaustion in the summer of 2008 in triple-digit temperatures. The nearest water cooler was a 10-minute walk and a foreman allegedly wouldn’t let her take a break to get a drink of water.

She arrived in a coma at the hospital with a body temperature of 108 degrees. She later died of heat exhaustion, three years after California issued groundbreaking heat illness regulations for employers to provide shade and water for farmworkers.

As the west coast grapples with a mixture of drought and heat waves, heat-related illnesses among farm workers has continued to persist. Particularly in Caifornia where 70 percent of the state is classified in a state of “exceptional” or “extreme” drought, heat waves are becoming more severe due to higher humidity and warmer nighttime temperatures, with the hottest summer days twice as likely to occur in the state’s Central Valley due to climate change.

But a decade after California implemented the heat illness emergency resolutions, some growers in one of the most agriculturally-rich parts of the country still have yet to ensure protections for farmworkers who work prolonged hours during peak heat times. The prolonged drought has thrown farms into crisis mode and sent temperatures soaring. At least 28 farmworkers have died since the regulations were passed, according to the United Farm Workers union.

In June 2015, two families settled their lawsuits separately filed in 2009 and 2012, with the hope that California would improve on-site inspections and punish violators. Under the terms of the settlement, the state’s Division of Occupational Safety and Health, better known as Cal/OSHA, agreed to improve enforcement standards in outdoor work spaces by requiring employers to provide shade when temperatures rise above 80 degrees and to provide 10-minute breaks every two hours when temperatures rise above 95 degrees.

The other half had no idea that these regulations were in existence or had to be enforced.

Employers must provide enough water so that employees can have about one quart of water, or four eight-ounce cups, per hour. Even though adequate water “must be located as close as it is feasible to place it to the areas where employees are working,” that doesn’t mean it’s convenient. One worker who went to the hospital for a heat illness told the Los Angeles Times that he didn’t stop to drink water because the water station was a mile away. What’s more, many employees are paid piecemeal by bucket and not by hour, so a loss of time to drink water could mean a loss of income.

Of all the racial groups surveyed for a 2014 University of Southern California and Los Angeles Times poll, Latinos making less than $50,000 are the ones hardest hit by drought, a phenomenon that has been linked to climate change. Some of California’s poorest Latinos are farmworkers, with median annual family earnings averaging $15,000 to $17,000 per year.

About 14 workers died from heat illnesses in California between 2005 and 2013, but it’s possible that the figure is closer to 30, the United Farm Workers labor union told Al Jazeera America. Among the heat illness victims include a 38-year-old man whose body temperature was recorded at 109.9 degrees. During the 2006 heat wave, Latinos had the most hospital visits. While the number of heat-related deaths have dropped since the regulations went into effect, the number of reported heat illnesses are remaining steady, Capital Public Radio reported earlier this month.

“Unfortunately we have to experience something like those deaths that were made very public [for regulations to be issued], but since then, Cal/OSHA has pursued very aggressive education outreach and tools to educate in various languages and definitely in Spanish,” Suguet Lopez told ThinkProgress. Lopez is the executive director of Lideres Campesinas, a grassroots advocacy group that primarily educates and empowers female farmworkers. She noted that her organization steps in to help workers who only speak indigenous languages.

“Frankly not everyone knows how to read and write, so we use theater [re-enactments] to do presentations, like ‘this is what you might experience if you’re exposed to hot weather.’ They might not connect it to heat illnesses so we give them advice based on what we have learned from the way they should dress to if they experience this, they should do this type of follow-up [treatment].”

The heat can have devastating impacts on physical and mental health. A 2014 American Meteorogical Society study found that hospital admissions in California went up on average 7 percent during peak heat wave days, putting people the risk of cardiovascular disease, respiratory disease, dehydration, acute renal failure, heat illness, and mental health issues. Almost 70 percent of farmworkers have no health insurance, an issue that challenges undocumented farmworkers who cannot access some health insurance programs. By some estimates, about six out of ten farmworkers working in the country are undocumented. The vast majority are also Latino.

It’s possible that some farmworkers in California may not even know that regulations are in place to keep them safe while working in hot temperatures. Maria Jimenez, the Ventura Chapter Representative of Lideres Campesinas, told ThinkProgress that about half of the workers she talks to had no idea the regulations were in existence or had to be enforced. “They told me some incidents where they weren’t given water or breaks,” Jimenez said in Spanish. Lopez translated on her behalf.

Jimenez estimated that about 70 percent of her 500-member organization are also undocumented. Because they don’t have health insurance and live in fear of deportation, these vulnerable workers tend to ignore the warning signs and work through illness.

If they speak up and nothing is done about it, they’ll suck it up because they need the income.

“The norm has been that if they experience some sort of illness in the work place, if they speak up and nothing is done about it, they’ll suck it up because they need the income,” Lopez said.

The drought in California is also decimating farmworker jobs. When 400,000 acres of farmland went fallow last year because of drought, more than 17,000 farmworker jobs were cut at a loss of $1.5 billion, California Department of Food & Agriculture Secretary Karen Ross said. The job cuts forced many farmworkers to line up for emergency food assistance in Mendota, CA, where the majority of residents work in the agricultural section and 50 percent of residents were expected to be jobless last year. According to Lopez, “farmworkers are being rotated so that no one is left without income. In terms of the crops, every crop has different needs so farmworkers are seeing a tendency to move towards planting and harvesting water-resistant plants like tomatoes instead of a lemon grove or strawberries.”

Jimenez’s son picks from lemon groves and is a firsthand observer to the drought and its impact to his livelihood. “In the past, farmworkers would get five to six boxes of lemons a day,” Jimenez said about her son, nervous that the diminished harvest, a result of growers conserving water for more water-resistant plants, could take away his job. “Today, it’s only a box or one-and-a-half boxes.”

When it comes to ransomware, you don't always get … END_OF_DOCUMENT_TOKEN_TO_BE_REPLACED

Peyton Carr is a financial advisor to founders, … END_OF_DOCUMENT_TOKEN_TO_BE_REPLACED