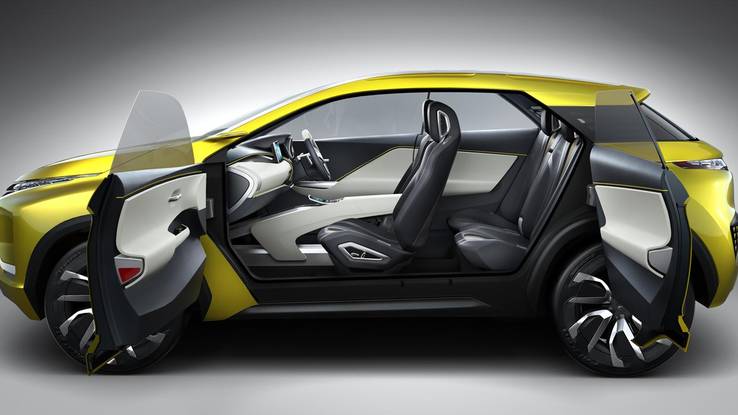 Mitsubishi Motors Corp. will roll out an all-electric compact crossover concept at the Tokyo Motor Show that showcases its new design language and automated driving ambitions. The eX Concept embodies Mitsubishi’s rugged new Dynamic Shield styling while packing in technologies, such as automatic parking and lane changing, that it hopes to launch by around 2020.

The low-slung crossover is envisioned as driving some 400 kilometers (250 miles) on its fully charged lithium ion batteries. Mitsubishi also aims to achieve that range by 2020.

When Mitsubishi pulls the wraps on the eX at this month’s auto show, the vehicle will encapsulate the company’s push to establish itself as a technological leader and its efforts to rejuvenate styling that had stagnated in recent years.

The Japanese carmaker, rebounding from years of financial distress, is now making electrified drivetrains a cornerstone of future growth along with a focus on emerging markets.

Mitsubishi says it aims to deliver a 250-mile range by doubling the energy density of its batteries in the next five years.

It also is ramping up the race for autonomous driving technologies, joining rivals Toyota Motor Corp., General Motors, Nissan Motor Co. and others in setting a 2020 horizon for bringing several advanced driver assist functions to market.

The eX concept previews several that are still under development. They include a driverless valet parking function that enables the car to seek out spots and park by itself.

Also on tap are several assist functions that use sensors to deliver more efficient cruise control, keep the car in its lane or even automatically switch lanes when needed.

The eX achieves four-wheel drive through two 70-kilowatt electric motors, one in the front, the other in the rear.

The battery capacity is billed as 45 kilowatt-hours.

While much of the technology in the eX is still years down the road, the fresh styling may make it to showrooms much sooner.

Indeed, the overall look of the car builds on the XR-PHEV II concept shown this year in Geneva. Both vehicles likely preview the next-generation Outlander Sport compact crossover.

The latest iteration gets the same basic stance as the XR-PHEV II with a heavy slash-like crease bisecting the cabin from the rear. But it also gets beefed up fenders and the currently in vogue floating roof treatment with blacked-out rear pillars.

Up front, it gets creative with a bank of headlights counter-intuitively positioned where fog lights might be, low and to the side on the bumpers. Day running lamps and turn indicators occupy a thin sliver wrapped around the hood crease.

When it comes to ransomware, you don't always get … END_OF_DOCUMENT_TOKEN_TO_BE_REPLACED

Peyton Carr is a financial advisor to founders, … END_OF_DOCUMENT_TOKEN_TO_BE_REPLACED