You are here: Home / World / Trump Demands IQ Test Be Given to London Mayor 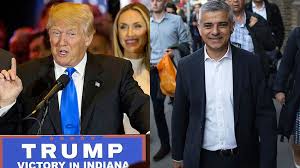 In response to Khan, who attacked Trump for being “ignorant” about Islam, the property tycoon said he “didn’t care” about the London mayor and challenged him to take an IQ test.

“Tell him I will remember those statements,” Trump said in an interview with ITV’s Good Morning Britain.

“When he won I wished him well, now I don’t care about him,” he said, adding that Khan issued “very rude statements” and he would remember “those very nasty statements”.

Following Trump’s interview, Khan’s spokesman said: “Donald Trump’s views are ignorant, divisive and dangerous — it’s the politics of fear at its worst and will be rejected at the ballot box just as it was in London.

“Sadiq has spent his whole life fighting extremism, but Trump’s remarks make that fight much harder for us all — it plays straight into the extremists hands and makes both our countries less safe.”

Sadiq Khan’s spokesman hits back at Trump call for IQ test: ‘Ignorance is not the same thing as lack of intelligence.’

Trump also responded to comments Prime Minister David Cameron made last year over his controversial proposal to ban Muslims from entering the U.S.

In the ITV interview, Trump clarified he was “not stupid,” and warned the two may not have a good relationship if he gets elected.

“I hope to have a good relationship with him, but it sounds like he’s not willing to address the problem either,” Trump said.

When it comes to ransomware, you don't always get … END_OF_DOCUMENT_TOKEN_TO_BE_REPLACED

Peyton Carr is a financial advisor to founders, … END_OF_DOCUMENT_TOKEN_TO_BE_REPLACED