You are here: Home / Technology / Ahead of Earnings, Some Apple ETFs See Outflows 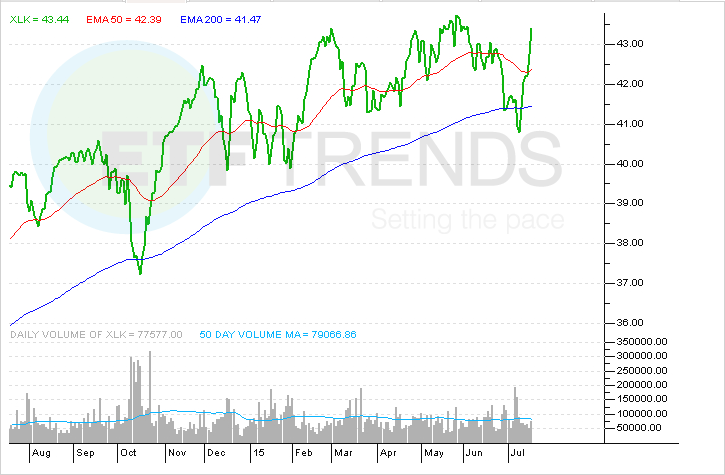 Apple (NasdaqGS: AAPL), the world’s largest company by market value, is slated to report fiscal third-quarter earnings after the close of U.S. markets Thursday with analysts forecasting a record $29.9 billion in iPhone sales.

Analysts are expecting California-based Apple to post earnings of $1.89 per share on sales of $49.2 billion, up from $1.40 per share on revenue of $37.4 billion last year, but investors in Apple-heavy exchange traded funds are not impressed.

Ahead of Apple’s earnings update, investors have departing ETFs with large weights to the iPhone maker, a phenomenon that has been seen in previous quarters ahead of the company’s earnings report. [No Love for Apple ETFs]

Since the start of this month, also the start of the third quarter, investors have pulled nearly $487 million from the Technology Select Sector SPDR (NYSEArca: XLK), the largest technology ETF by assets. That despite the fact that XLK is up 3.4% since July and is flirting with 15-year highs. [ETFs With big Apple Weights]

The $13.2 billion XLK has a 17.8% weight to Apple, one of the largest of any ETF. That is nearly double the ETF’s weight to Microsoft (NasdaqGS: MSFT) and more than quadruple its weight to International Business Machines (NYSE: IBM). Still, there has been an increase in XLK options activity.

“The September 45 strike calls traded more than 46,000 times last Friday and these options are out-of-the-money at current levels with XLK trading with a $43 handle, but a bullish bet nonetheless on potential additional upside in the tech sector, said Street One Financial Vice President Paul Weisbruch in a note out Monday.

Home to a 20.7% weight to Apple, the $2.9 billion iShares U.S. Technology ETF (NYSEArca: IYW) is perhaps the epitome of an “Apple ETF,” but that status has not stopped investors from pulling $168 million from the fund this month. [Look to Tech ETFs for Growth Opportunities]

With a 16.9% weight to Apple at the end of June, the Vanguard Information Technology ETF (NYSEArca: VGT) has modestly bucked the Apple ETF outflow trend this month with the addition of $21.1 million in assets, but there is another surprise among Apple-heavy ETFs incurring outflows.

Even with the Nasdaq Composite resting at all-time highs, the PowerShares QQQ (NasdaqGM: QQQ), the Nasdaq-100 (NDQ) tracking ETF, has lost $494.3 million this month. QQQ is close its all-time intraday high of $120.50 last seen in March 2000 and the ETF has surged almost 5.1% this month on the back of big gains for Google (NasdaqGS: GOOG), Amazon (NasdaqGS: AMZN) and Facebook (NasdaqGS: FB).

Apple is QQQ’s largest holding at a weight of 13.9%, nearly double the weight the ETF allocates to Microsoft.

When it comes to ransomware, you don't always get … END_OF_DOCUMENT_TOKEN_TO_BE_REPLACED

Peyton Carr is a financial advisor to founders, … END_OF_DOCUMENT_TOKEN_TO_BE_REPLACED