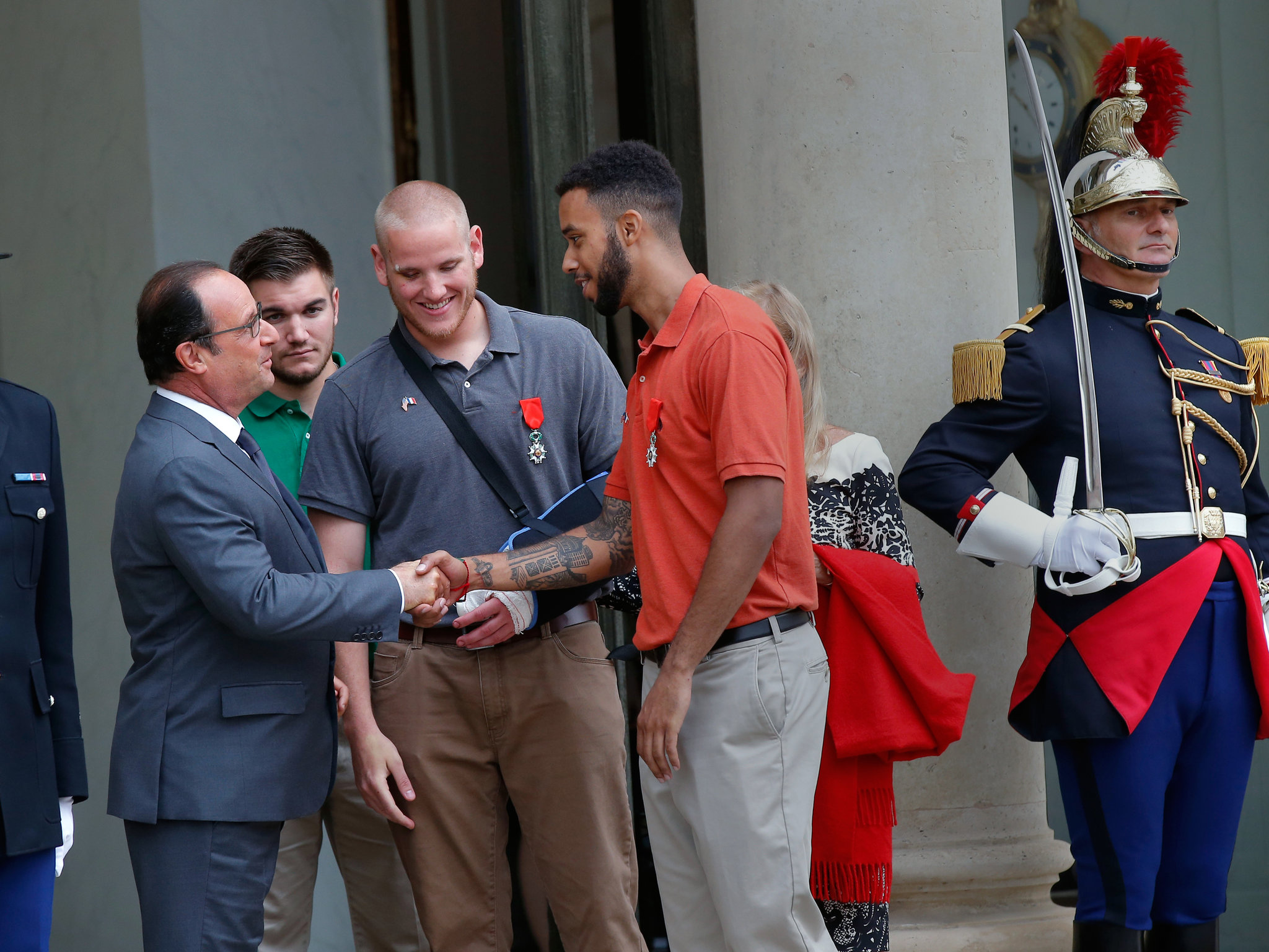 President François Hollande of France on Monday awarded the Legion of Honor, France’s highest award, to three Americans and a Briton for their role in stopping a gunman on a high-speed train traveling to Paris from Amsterdam on Friday.

The three Americans — airman First Class Spencer Stone, 23; Alek Skarlatos, 22, a specialist in the Oregon National Guard; and their friend Anthony Sadler, 23, — received the honor in the gilded halls of the Élysée Palace, where they were joined by Chris Norman, 62, a British consultant.

“One need only know that Ayoub El Kahzani was in possession of 300 rounds of ammunition and firearms to understand what we narrowly avoided, a tragedy, a massacre,” Mr. Hollande said at the ceremony, referring to the suspect in the attack, a Moroccan who is in police custody and denies that he had planned to stage a terrorist attack.

“Your heroism must be an example for many and a source of inspiration,” Mr. Hollande added. “Faced with the evil of terrorism, there is a good, that of humanity. You are the incarnation of that.”

After his speech, Mr. Hollande pinned the Legion of Honor medal on the three Americans, who wore khaki slacks and polo shirts, bringing a casual touch to the ornate ceremony. Airman Stone, whose thumb was severely cut by the gunman, still had his left arm in a sling as well as a bruised eye.

The three friends were on a tour of Europe that included stops in France, Germany, Italy, the Netherlands and Spain. They had originally intended to spend Friday night in Amsterdam but changed their minds and boarded a high-speed Thalys train to Paris. Shortly after the train crossed the Belgian border into France, they heard a shot, saw a gunman with an AK-47 and rushed to stop him.

A French citizen who was the first to tackle Mr. Kahzani but who has declined to be identified will receive the honor at a later date, as will Mark Moogalian, 51, a passenger with dual French and American citizenship who struggled with the attacker and is recovering from a bullet wound.

The courageous responses to the presence of a gunman drew attention and praise from around the world, especially in France, where many quickly encouraged Mr. Hollande to award the men the Legion of Honor, which was created by Napoleon Bonaparte in 1802 to reward “outstanding merit.” Several senior officials, including Prime Minister Manuel Valls and the head of the French rail company, attended the ceremony on Monday.

Mr. Norman, speaking in French to reporters after the ceremony, said he felt honored by the distinction. “I did what I had to do,” he said. “It wasn’t heroism, it was what needed to be done in a situation of survival.”

The three Americans did not speak publicly on Monday, but at a news conference on Sunday at the American ambassador’s residence they brushed aside suggestions that they were heroes and framed their actions as having come from survival instincts.

On Monday, the three grinned as they posed for photographs with Mr. Hollande and the American ambassador, Jane D. Hartley, on the steps of the Élysée Palace. After the ceremony, the three men and their families were expected to meet staff members at the United States Embassy, near the presidential palace.

The upbeat mood will do little, however, to dispel growing unease in Europe about how to deal with new threats to targets like trains and how to monitor thousands of potential suspects, especially radical Islamist militants returning from Syria.

“Faced with terrorism, our societies are not weak,” Mr. Hollande said at the ceremony. “And they will never be weak as long as they stay united, and as long as there are brave women and men ready to risk their lives.”

While only French citizens can be members of the Order of the Legion of Honor, foreigners can receive the medal, which has also been awarded to the novelist Toni Morrison and the actor Clint Eastwood. Airman Stone, Mr. Skarlatos, Mr. Sadler and Mr. Norman were made knights of the order, the lowest of four ranks.

When it comes to ransomware, you don't always get … END_OF_DOCUMENT_TOKEN_TO_BE_REPLACED

Peyton Carr is a financial advisor to founders, … END_OF_DOCUMENT_TOKEN_TO_BE_REPLACED