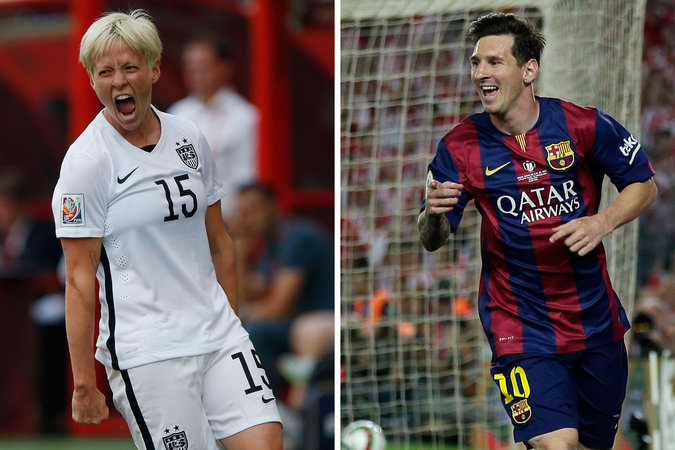 Megan Rapinoe picked up the ball at the halfway line at the Womenâs World Cup and sped forward. When she finally encountered a defender, she effortlessly jinked by her and shot the ball into the net to seal a victory for the United States over Australia.

What’s the right way to describe such a feat?

“I was doing my best Messi impression,” Rapinoe said after the game on Monday.

As the World Cup in Canada gives women’s soccer its time in the spotlight, fans, coaches, the news media and the players themselves are closely watching the stars of the women’s game. And then likening them to men.

Some of the players do not especially welcome it. Vivianne Miedema, the 18-year-old star of the Dutch team, is the “female Arjen Robben.”

“Yeah, I get that a lot,” Miedema told FIFA.com. “But Arjen plays very differently to me. It’s really cool to be compared to him, but, as a woman, it’s a bit strange to always be compared to a man. I’m Vivianne Miedema, and I don’t play like men do.”

“The comparisons are nice in a way,” Schelin said. “But although he inspires me, and I love watching him play, there are big differences between us, too. And I like that young girls look up to me as Lotta Schelin, not as ‘the female Zlatan.'”

Julie Foudy was a star on the 1999 World Cup team that put women’s soccer on the sports radar in the United States, and she is now an analyst and commentator for ESPN. She said she wished players in the Cup were more often compared to female stars of the past like Mia Hamm. Bur she knows that because of the ubiquity of men’s soccer, comparisons to men are inevitable.

“I get it, because that’s what people see on television,” Foudy said. “There’s no opportunity to follow the women’s game. It’s really hard to find it.”

Many female players are avid followers of the men’s game, Foudy said, and it is the players themselves who are often the source of comparisons to men.

“Messi’s my role model,” Ramona Bachmann of Switzerland told FIFA.com. “He’s so exceptional, it’s like he’s from another planet.”

Gaelle Enganamouit, who scored a surprise hat trick in Cameroon’s opener, said: “In my view, Samuel Eto’o is the greatest forward in the world. I’ve always said that one day I will be the Samuel Eto’o of women’s football.”

Enganamouit’s team is making its women’s World Cup debut. “They are the first generation,” Foudy noted. “There is no Michelle Akers or Mia Hamm for them. You hope the next wave behind them will have them as role models.”

There is nothing new about comparisons like this. The five-time player of the year Marta of Brazil has long been “the female Ronaldinho.” Louisa Necib of France is often likened to Zinedine Zidane, another French player of Algerian ancestry.

And the phenomenon is not unique to women’s soccer. Sheryl Swoopes, the three-time W.N.B.A. most valuable player, has often been called the “female Michael Jordan.” But the male-female comparisons do not seem to be so common in individual women’s sports; Serena Williams, Lindsey Vonn and the mixed martial arts champion Ronda Rousey are mostly recognized for their own achievements, rather than as female versions of Roger Federer, Bode Miller or Brock Lesnar.

It is understandable that those who follow women’s soccer only once every four years will reach for a familiar shorthand to describe what they see.

Perhaps the moment women’s soccer fully arrives will be when the next fast-dribbling winger to join Chelsea or Barcelona is described as the “male Megan Rapinoe.”

When it comes to ransomware, you don't always get … END_OF_DOCUMENT_TOKEN_TO_BE_REPLACED

Peyton Carr is a financial advisor to founders, … END_OF_DOCUMENT_TOKEN_TO_BE_REPLACED