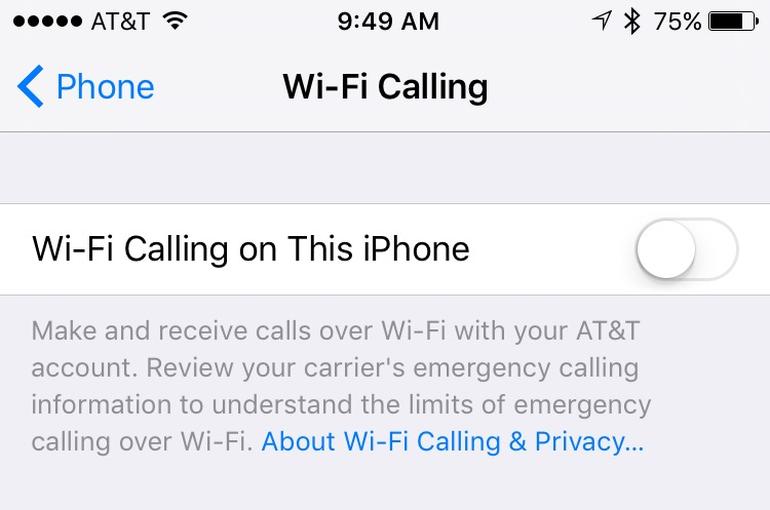 If you’re an AT&T customer with an iPhone, you’ll notice there’s a Wi-Fi Calling option in your Phone app settings thanks to the iOS 9 software update. You can even hit the slider to turn on Wi-Fi calling. That’s as far as you’ll get though. Attempting to enable the feature results in the above message.

Based on a letter filed by AT&T to FCC Chairman, Tom Wheeler, the carrier says it planned to provide Wi-Fi calling services in September but is waiting on the FCC to offer a waiver.

The waiver request revolves around regulatory TTY rules, which aid in communications for the hearing impaired.

Fierce Wireless, which reported on the waiver request, notes that neither T-Mobile nor Sprint — both of which offer Wi-Fi calling — requested such a waiver.

To some degree, the situation is related to the newer RCS, or Rich Communications Services, that Google is now invested in for Android: The company bought RCS-pioneer Jibe Mobile earlier this week.

T-Mobile started to implement RCS under its Advanced Messaging brand earlier this year, for example. AT&T suggests to the FCC that Real Time Text should be recognized as meeting requirements for the deaf while T-Mobile feels RCS should be universally accepted.

Either way, there appear to be different acceptable rules for the carriers at this point when it comes to Wi-Fi calling because of the different approaches.

Why the FCC hasn’t resolved this yet, however, is a bit of head-scratcher.

AT&T filed its request for a waiver — saying it would be adding RCS support in 2016 — back in June. And the FCC didn’t, according to AT&T’s filing, issue Public Notice on the request for six weeks and then opened up a 45-day comment cycle. Interestingly, that cycle closed in early September without any opposition, says AT&T.

Coincidentally, Google’s Project Fi service offers Wi-Fi calls, and even hands them off to both T-Mobile’s and Sprint’s cellular networks. Hmmm… maybe it’s not such a coincidence after all.

When it comes to ransomware, you don't always get … END_OF_DOCUMENT_TOKEN_TO_BE_REPLACED

Peyton Carr is a financial advisor to founders, … END_OF_DOCUMENT_TOKEN_TO_BE_REPLACED