You are here: Home / Technology / Baxter the Robot Can Beat You at Connect Four 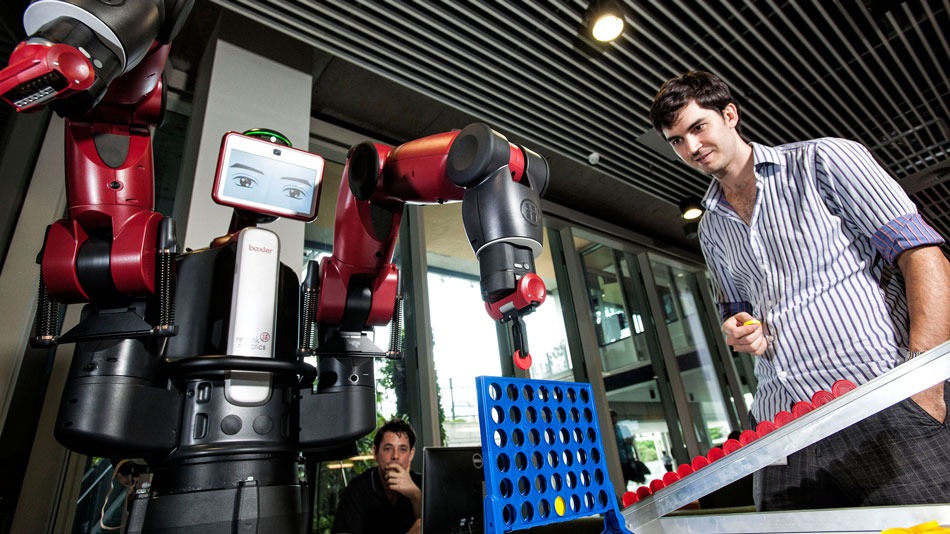 Sometimes a robot would just like to play a nice, quiet game of Connect Four, rather than languishing on a busy factory floor. On Sunday at Robotronica, a robotics event in Brisbane, Baxter the robot went head to head with kids of all ages, wielding the little yellow and red disks with its mechanical hand.

The android even frowned when it lost, which was often.

Created by the Boston company Rethink Robotics, Baxter is built to be easily programmable and to safely work alongside humans. It’s also equipped with sensors that let it perceive the world around it, and spring joints so it can move its limbs flexibly. Due to all these characteristics, the Baxter at Robotronica is normally used for research and teaching at the Queensland University of Technology (QUT).

Researchers at the Australian Centre for Robotic Vision (ACRV), based at QUT, are working on improving the vision of robots like Baxter, in the hope they could one day pick fruit and vegetables on farms. ACRV Director Peter Corke said in a statement in March, their Baxter is now able to adjust to obstacles in its path. “We’ve tried to ‘rush’ Baxter before and can certainly vouch for his quick reflexes,” he said.

In the meantime, the android can also indulge in a game of Connect Four to the delight of Brisbane’s tiny competitors. But the question remains: When will they be able to beat us at Scrabble?

Here’s a more detailed video of Baxter’s playing prowess for those who want to understand their enemy.

When it comes to ransomware, you don't always get … END_OF_DOCUMENT_TOKEN_TO_BE_REPLACED

Peyton Carr is a financial advisor to founders, … END_OF_DOCUMENT_TOKEN_TO_BE_REPLACED