You are here: Home / World / Behind Scott Walker, a Longstanding Conservative Alliance Against Unions 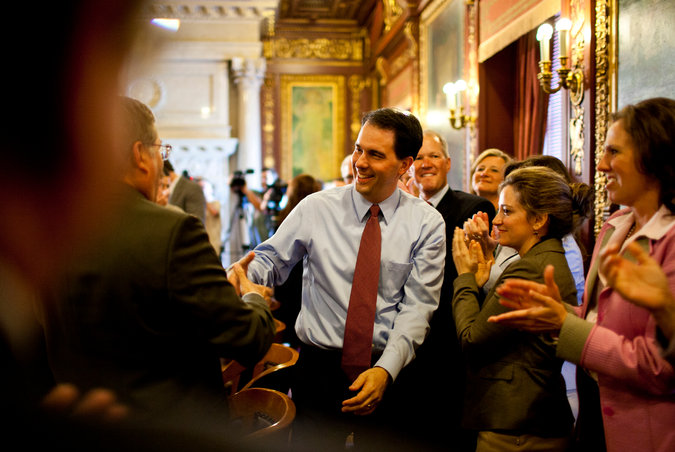 MADISON, Wis. - Less than a week after he was elected governor of Wisconsin in 2010, Scott Walker went to Milwaukee at the invitation of his political patron, Michael W. Grebe.

Mr. Grebe was Mr. Walker’s campaign chairman. He was also president of the Bradley Foundation, a leading source of ideas and financing for American conservatives. And the bankers, industrialists and public intellectuals on the foundation’s board wanted to honor the state’s next governor over dinner at Bacchus, a favorite restaurant of the city’s elite.

While the Milwaukee-based Bradley Foundation could not endorse candidates outright, it provided more than $2 million in grants to think tanks that implicitly championed Mr. Walker’s small-government platform, and $520,000 to Americans for Prosperity, a national group that held Tea Party rallies at which Mr. Walker spoke.

Addressing the assembled conservatives who had laid the groundwork for his transformation from county executive to governor, Mr. Walker did not disappoint, pledging to “go big and go bold” in office. In the months that followed, he would deliver on that promise, breaking Wisconsinâs public employee unions in a bitter battle, surviving a recall effort led by angry Democrats and making his fight the centerpiece of an as-yet-unannounced presidential campaign.

More than any of his potential rivals for the White House, Mr. Walker, 47, is a product of a loose network of conservative donors, think tanks and talk radio hosts who have spent years preparing the road for a politician who could successfully present their arguments for small government to a broader constituency.

Mr. Walker has embraced those goals in Wisconsin, and the promise of his fledging presidential campaign is to do the same in Washington. The little-known governor-elect honored in Milwaukee has become something of a conservative hero, backed by wealthy donors like Charles G. and David H. Koch and revered as a leader brave enough to face down unions and their liberal supporters.

At his side during his rapid rise was Mr. Grebe, who provided crucial validation for Mr. Walker among Wisconsin Republicans skeptical that a college dropout turned career politician would become a successful and consequential governor.

“At the risk of being immodest, I probably lent some credibility to his campaign early on,” Mr. Grebe, 74, said in a recent interview.

Many Democrats and union leaders would call that an understatement.

“Scott Walker didn’t have the stature, influence or money to become governor on his own or to end collective bargaining on his own,” said Phil Neuenfeldt, president of the Wisconsin A.F.L.-C.I.O. “All of that flowed from Mike Grebe, the Bradley Foundation and a network of influential conservatives, including the Kochs.”

Mr. Neuenfeldt added: “He wouldn’t be running for president without these people. He would be their guy in Washington.”

But the reasons for Mr. Walkerâs success are more complex. In the Wisconsin Legislature and as Milwaukee County executive, he always liked going to extremes and basking in his own brand of boldness. What he needed, as he climbed the political ladder, was the money and endorsements that Mr. Grebe and his conservative allies brought. As for the fight against the unions, it went far better than Mr. Walker, Mr. Grebe or anyone else could have expected, as weeks of huge protests drew a national news spotlight that let Mr. Walker shine.

“It made Scott Walker a national candidate,” said Tommy G. Thompson, a Republican who was governor of Wisconsin from 1987 to 2001. “It showed that he could stand up to pressure. And he didnât back down. And people want that in a leader.”

Mr. Walker declined to comment on his conservative supporters, but Rick Wiley, executive director of Our American Revival, the governor’s political committee, cited his record of changing the state government in Wisconsin as an example of his leadership. “Tough times called for big, bold solutions, and Scott Walker thought outside the box,” Mr. Wiley said. “His reforms transformed Wisconsin for future generations, because that’s what leaders do.”

An Ally of Unions’ Foes

Unions were the bane of Wisconsin conservatives long before Mr. Walker first entered office in 1993 as a state assemblyman. After Wisconsin took the landmark step in 1959 of allowing collective bargaining for public employees, state spending grew steadily to help cover negotiated salaries and generous benefits, and so did the criticism from retailers, manufacturers and bankers.

Conservatives focused instead on pushing for a welfare overhaul and private school vouchers, with particular help coming from the Bradley Foundation, which spent millions of dollars on think tank reports and advocacy groups championing both policies. The foundation – named after brothers, Lynde and Harry Bradley, who were well-known Wisconsin industrialists – has more than $800 million in assets. It supports arts, education and health organizations in Wisconsin as well as, increasingly, the goals of American conservatism.

That focus has intensified under Mr. Grebe, a West Point graduate and Vietnam veteran who led the law firm Foley & Lardner before taking over the foundation in 2002. Mr. Grebe was always drawn to the national stage: He was general counsel of the Republican National Committee and a Wisconsin power broker for presidential candidates, including as state chairman for Ronald Reagan’s re-election campaign in 1984.

Mr. Grebe spotted Scott Walker when Mr. Walker, who considers Reagan his political role model, was a Marquette University student volunteering at events for Reagan or the Republican Party of Wisconsin. Mr. Grebe recalled no particular impressions of Mr. Walker from those encounters, but Mr. Walker got his attention years later as a candidate for Milwaukee County executive.

Mr. Grebe, who donated $1,000 to Mr. Walkerâs executive campaign and became a member of his transition team, said he had come to believe that Mr. Walker was determined to bring change to the county in spite of “a highly charged partisan relationship with the Democratic-led county board.”

“If all he was was a bulwark to an entrenched Democratic majority, I don’t think he would be interested in any job,” Mr. Grebe said. “He’s really interested in change, in doing bold things.”

So were others. Americans for Prosperity, the group financed by the Kochs, started a Wisconsin chapter led by a veteran Republican operative there, Mark Block, who tapped into voters’ anger at Gov. James E. Doyle, a Democrat, and his tax and spending increases. From 2006 to 2010, the chapter grew to 100,000 members from 250 and drew huge crowds for meetings that eventually evolved into Tea Party events.

Mr. Block and his group’s national president, Tim Phillips, got to know Mr. Walker when he was county executive; he joined them during one of their “Ending Earmarks Express” bus tours, and they kept a close eye on him.

“We thought here’s this young, newer, local leader who is not nibbling around the edges but really getting serious about issues, especially trying to take on the unions on spending and pension issues,” Mr. Phillips said.

The Bradley Foundation gave to Americans for Prosperity but was more integral to financing two think tanks that railed against Mr. Doyle and generated policy ideas and talking points that were picked up by Wisconsin’s powerful bench of right-wing talk radio hosts. In 2009, the foundation gave a $1 million grant to one of the think tanks, the Wisconsin Policy Research Institute, to recommend policy ideas for the next governor. It also backed the MacIver Institute, providing one-third of its budget.

Both think tanks proposed dozens of small-government policies, and at the top of their lists was curbing the power of the public employee unions.

“Some people in the Walker campaign were scratching their heads about how to deal with union health and pension costs, and we supplied the ideas,” said James R. Klauser, who was chairman of the Wisconsin Policy Research Institute at the time. “Mike Grebe wanted to see union reform, but I don’t think he got into the details. But the issue was a good match with Walker himself: He’s very conservative, and he takes pride in trying big things.”

By the time Mr. Walker ran for governor in 2010, he was clashing regularly with unions, calling for cost savings through shorter hours, layoffs, privatization, even an imagined disassembling of the very government he ran.

“Never did we ever have a civil moment with that man,” said David Eisner, a local official for the American Federation of State, County and Municipal Employees, a big public workers union.

The approach played well in the state’s interwoven universe of conservative talk radio, where Mr. Walker became a favorite guest of hosts like Charlie Sykes of WTMJ in Milwaukee. Mr. Sykes, whose wife is director of community programs at the Bradley Foundation, has a daily radio show and a television program and edits Wisconsin Interest, a magazine from the Wisconsin Policy Research Institute.

During the governor’s race, Mr. Walker sometimes spoke of “haves and have-nots,” referring to public-sector workers and those in private business. He did not announce specific plans to cut bargaining rights, and some, like Mr. Grebe, said they had never heard him explicitly address ending collective bargaining. Yet the two men had similar views about unions, Mr. Grebe said, and Mr. Walker was determined to get union members to pay more for their pension and health care benefits.

If Mr. Walker had not been on the Kochs’ radar before, he was now. The political action committee for their energy conglomerate, Koch Industries, donated $43,000 to Mr. Walkerâs 2010 bid, while Americans for Prosperity focused on organizing for legislative races.

The result was that for the first time in about a decade, Wisconsin found itself with a Republican governor and a Republican-led Assembly and Senate.

Three weeks later, the MacIver Institute posted an opinion column that made the first public case for repealing collective bargaining to take back control of pay and benefits for public employees. MacIver’s leaders said they had not coordinated the idea with Mr. Walker or the Bradley Foundation - it just seemed obvious that everyone was moving toward a “big and bold” solution, as Mr. Walker kept putting it.

Still, MacIver’s leaders were not sure it would go anywhere.

“I didn’t think there would be the votes in the Legislature,” said Brett Healy, president of MacIver. “I think it’s safe to say Capitol insiders would have initially bet the house that Governor Walker would’ve had no shot at passing collective bargaining reform.”

But Mr. Walker announced a drive to do just that in February 2011, six weeks into his governorship, proposing a bill that became known as Act 10. He portrayed it as a simple antidote to a looming fiscal hole for the state, saying, “I’m just trying to balance my budget.”

Within days, the State Capitol in Madison was crammed with enraged union members and supporters. When the issue reached the Senate, the Democratic minority secretly fled the state, a gambit aimed at denying Republicans the quorum needed to call a vote on any bill involving the appropriation of funds.

As the chaos mounted, at least a few Republicans quietly urged Mr. Walker to tone down his proposal. “There were prominent people who said,’You need to get out of this,'” Mr. Sykes, the WTMJ host, recalled.

Yet an entirely different dynamic was emerging, too. With cable news satellite trucks broadcasting a constant loop of reports from Madison, the standoff captured the attention of conservatives outside Wisconsin who had never heard of Mr. Walker. The images, of Democrats who had fled town and screaming protesters camped out all over the elegant Capitol, galvanized Republicans.

On talk radio, hosts spoke of threats to Republican leaders and their famili

When it comes to ransomware, you don't always get … END_OF_DOCUMENT_TOKEN_TO_BE_REPLACED

Peyton Carr is a financial advisor to founders, … END_OF_DOCUMENT_TOKEN_TO_BE_REPLACED