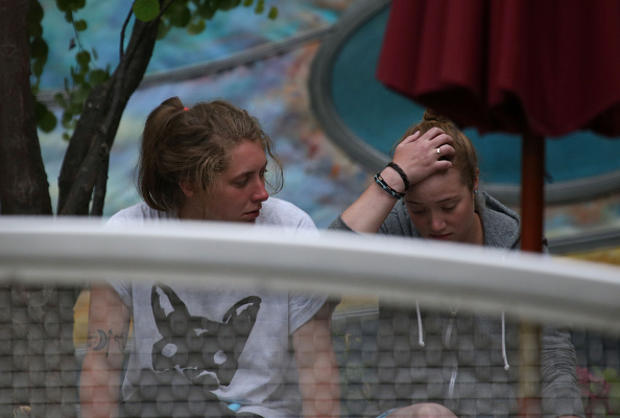 The remaining wood beams of an apartment building balcony that was removed below a balcony that collapsed is shown is shown in Berkeley, Calif., Thursday, June 18, 2015.

Some of the injured survivors of last month’s balcony collapse in Berkeley are getting treatment in the South Bay.

Six Irish students were killed when the balcony tore away from the apartment building. Of the seven survivors, four are now patients at the brain injury and spinal cord injury unit at the Santa Clara Valley Medical Center.

In a statement released Monday, the families of Aoife Beary, Clodagh Cogley, Hannah Waters and Niall Murray praised the staff, but say their children’s victories are tiny ones, such as sitting up or breathing on their own.

The family members said, “We obviously share everyone’s wish for speedy recoveries but we have found that every new week brings more complexity and that the road to recovery is far from straight, even in the very best of clinical environments.”

The statement continued, “As traumatic and difficult as the past five weeks have been for Aoife, Clodagh, Hannah and Niall, our constant thoughts and prayers are with the bereaved families and friends of Eimear Walsh, Ashley Donohue, Olivia Burke, Niccolai Schuster, Lorcan Miller and Eoghan Culligan. May they rest in peace.

“We are also very mindful of the many friends who were there in Berkeley that terrible night, some of whom were also seriously injured and others who responded so tenderly to the needs of our children at the scene and in the immediate horrific aftermath. They could never have imagined such a tragic end to their J1 (summer program) experience.”

In addition, the family members thanked Berkeley police and fire department staff, ambulance paramedics, the people of Berkeley and surrounding areas, Philip Grant and his staff at the Irish Consulate in San Francisco and the Irish Immigration Pastoral Centre in San Francisco.

They said Beary, Cogley, Waters and Murray “are now continuing their long treatment and recovery under the care of the superb doctors, nurses, therapists and other staff and management at the Santa Clara Valley Medical Center.”

In the wake of last month’s deadly balcony collapse, the Berkeley City Council is poised to consider a host of new rules on Tuesday – from requiring stricter building materials to inspections every five years. Mark Matthews reports.

When it comes to ransomware, you don't always get … END_OF_DOCUMENT_TOKEN_TO_BE_REPLACED

Peyton Carr is a financial advisor to founders, … END_OF_DOCUMENT_TOKEN_TO_BE_REPLACED